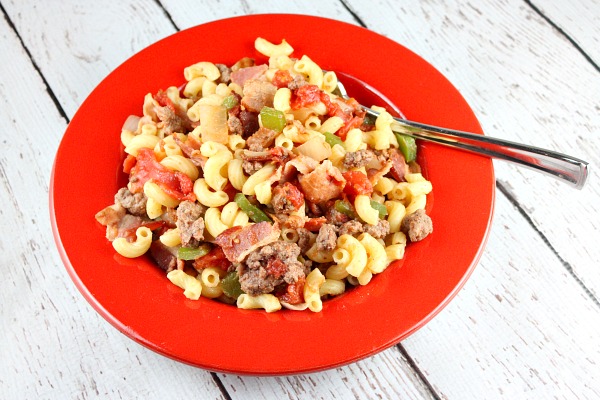 Wahlburgers is one of my favorite TV shows, so this week I decided to make a Wahlberg family classic. On their show, the mom of all of the boys (Alma) explained how she had to make budget friendly meals every night for the kids. The chef in charge of the Wahlburgers restaurant (Paul Wahlberg) always says in the intro to the show that they were very poor people when he was growing up. In order be able to eat food every night, Alma had to cook simple and cheap recipes. On the Wahlburgers show, the Wahlberg boys always talk about their mom’s American Chop Suey. I had never had chop suey before in my life… so I thought that it was just some crazy mixture of meats and whatever the heck suey is. And oh, how terribly wrong I was!

What is American Chop Suey?

American Chop Suey is a bunch of meats and noodles and vegetables thrown into a dish. Although the dish tastes AMAZING… I wondered if I could create a better name for it. I pondered the thought for almost an hour, when an idea struck me. I knew the answer. I should call it: Beef with Bacon and Vegetables with Noodles. Great name right? 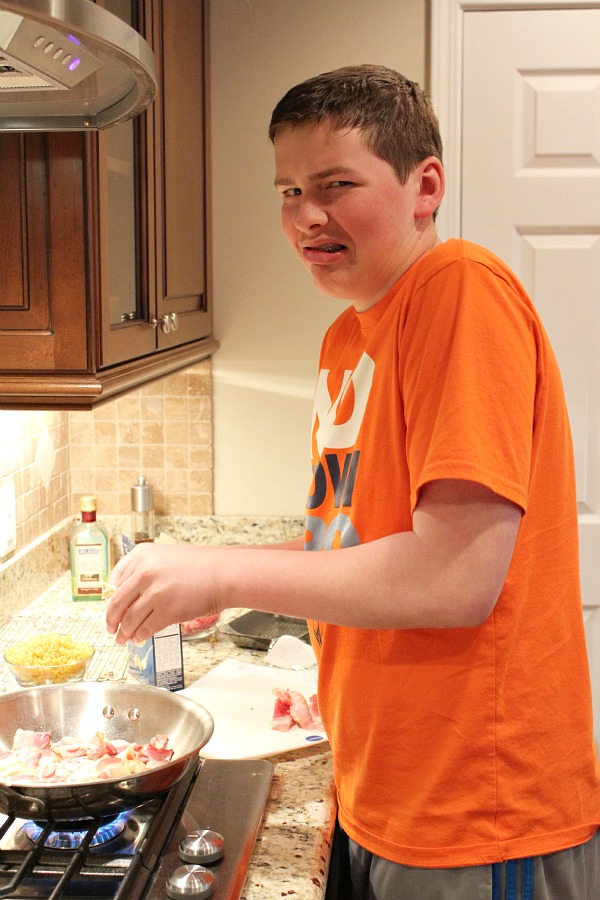 I had just watched an episode of the Walking Dead (the newest addition to my favorite current TV shows) prior to making the American Chop Suey, so cutting the bacon up and tearing the beef felt so much like zombie guts! I was so disgusted. It was not a fun experience. Not fun at ALL! 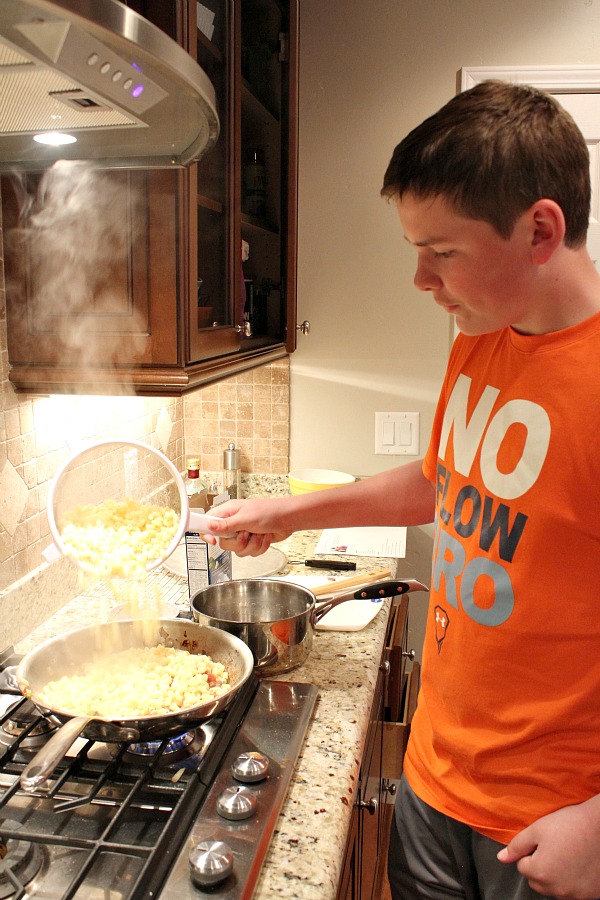 What would life be like without pasta? Thank you Italians! Merci. Wait no that’s French. Oops. It’s grazie in Italian. And no, I did NOT have to look that up. 🙂

My oh my. What could get better than this? This American Chop Suey is amazing (no matter what type of budget you have).

This summer when my family goes to Massachusetts for our usual vacation, I’m definitely going to Wahlburgers Burger Restaurant. Maybe I can even get an interview set up with Paul Wahlberg (the head chef)! That would be the best if I could actually tour the facility and interview Paul Wahlberg! Meeting the Wahlbergs would just be such a cool experience. These guys went from nothing in their youth to practically everything nowadays! 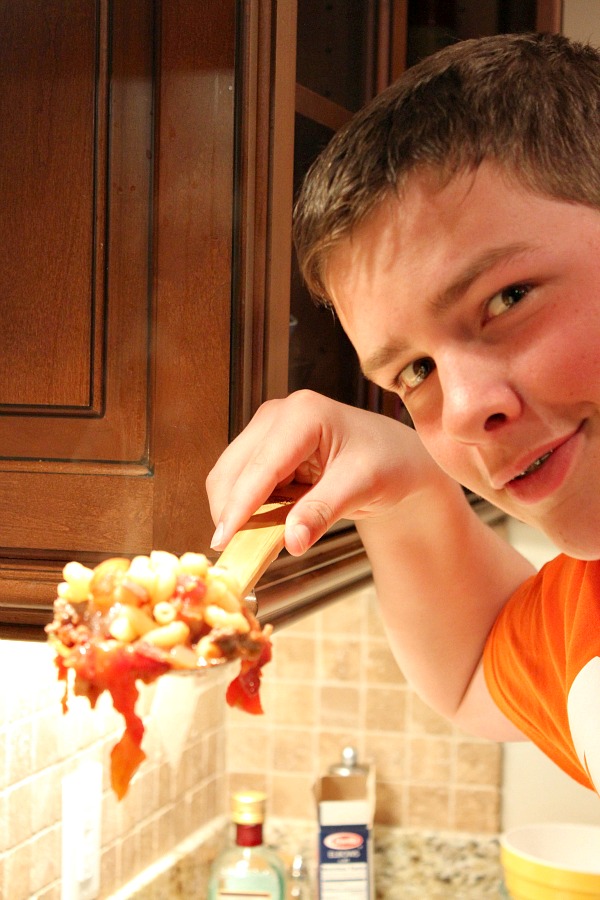 I want to take a huge bite of chop suey right now. I don’t care if I eat part of the wooden spoon, I just want some of that chop suey.

I’m very surprised that I’m not drooling in this picture. I wouldn’t be surprised if I started drooling when there is a whole spoonful of chop suey right next to my face! I’m pretty sure everyone would be wowed by this chop suey. 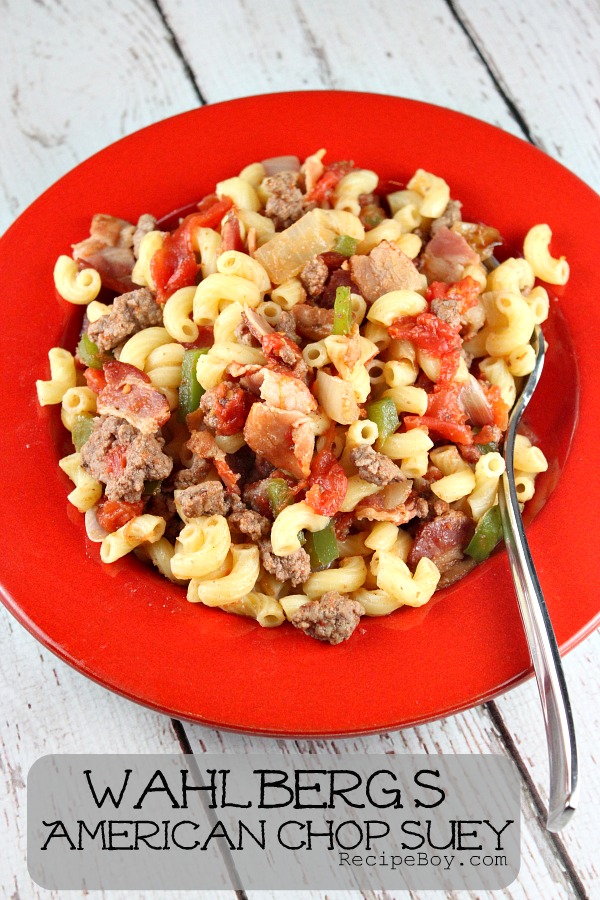 This Wahlberg’s American Chop Suey is the best! It’s sort of like a crock-pot recipe but without the crock-pot. I love the style of just basically throwing everything into a pot and letting it cook.

Being able to cook a Wahlberg family recipe was definitely a cool experience. After seeing the American Chop Suey on Wahlburgers a million times, I was able to make it. My chop suey may not have been as good as Alma’s chop suey, but it was still wicked good. I have to say that I will definitely be making this recipe again. And I can’t wait for that day. 🙂

And even a kid can cook a recipe featured a million times on a TV show… Like Me!

If you’re looking for more easy dinner recipes, you might want to try my Easy Chicken Chow Mein or my Pizza Sloppy Joes.  These BBQ Chicken Tostadas look pretty amazing too!

I'm from mass and when I make this I thicken the sauce with yellow american cheese, mushrooms are good in it too

Looks delicious, I used to have this as a kid in a local lunch place.  They served it on Wednesday’s and I never missed it.  Been dying for it, making it tonight.  Definitely a Boston kinda thing and New England in General.   thanks for posting it.

Alma's American chop sued is awesome. Made it today yum

I also grew up in MA and my Nana and Mom made American Chop Suey without the peppers. When it as all cooked we put it in the oven and laid uncooked bacon pieces across the top and baked it, covered, for about 30 minutes. When it came out of the oven, the bacon would barely be cooked, still a little on the limp side, but delicious.

I grew up in Michigan (and poor too) but we call it goulash (GOO-losh) and I make it for my kids now. We put a little parmesan on top. I add crushed red pepper on mine.