These Raspberry Shortbread Bars are completely delicious and totally addicting.  You won’t be able to stop eating them! 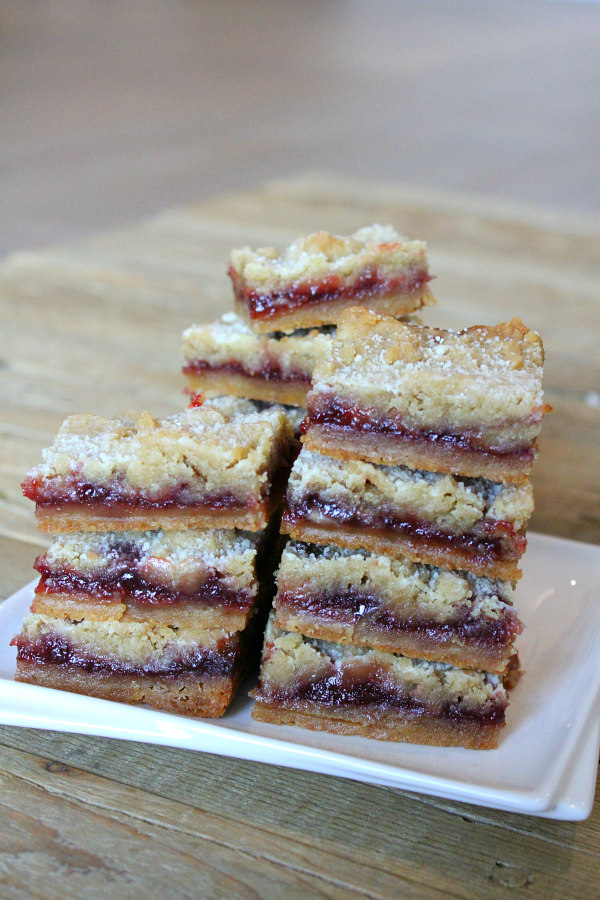 Hi, it’s RecipeGirl here (Brooks’ Mom).  Brooks is in his first year of college at Southern Methodist University in Dallas, and since he’s busy with all of that… I’m going to share recipes on his blog until he’s home on Christmas break.  Then he’ll have time to pop in and share a recipe and share about his experience in college. In the meantime, I’ll share some updates and photos once in a while, and give you some great recipes to try!

I made these Raspberry Shortbread Bars for a couple of parties we had this summer.  The recipe makes 30 small bars, so I served half of the recipe at one party, and I froze the other half of the recipe to be served at the next party.  It worked perfectly, and they were a big hit at both parties! 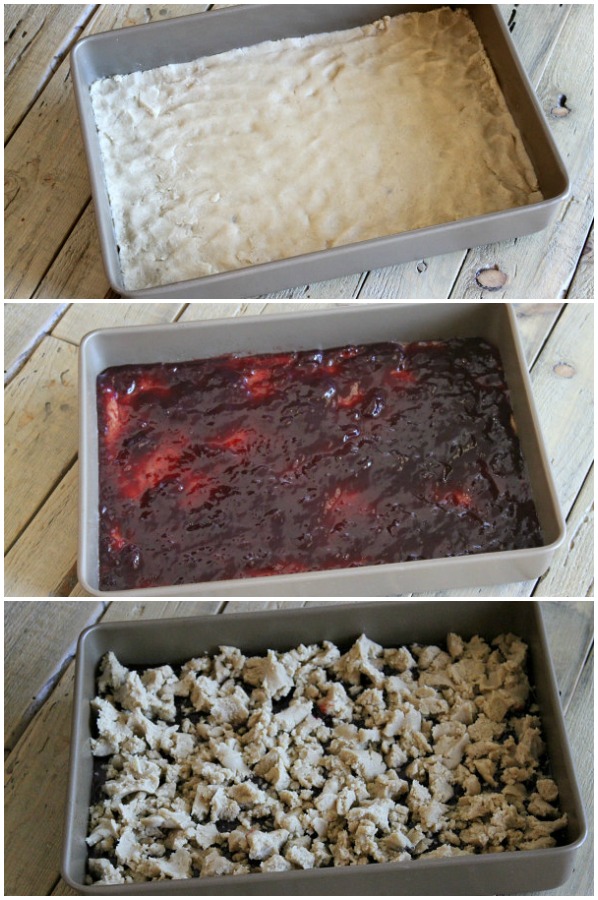 How to make Raspberry Shortbread Bars: 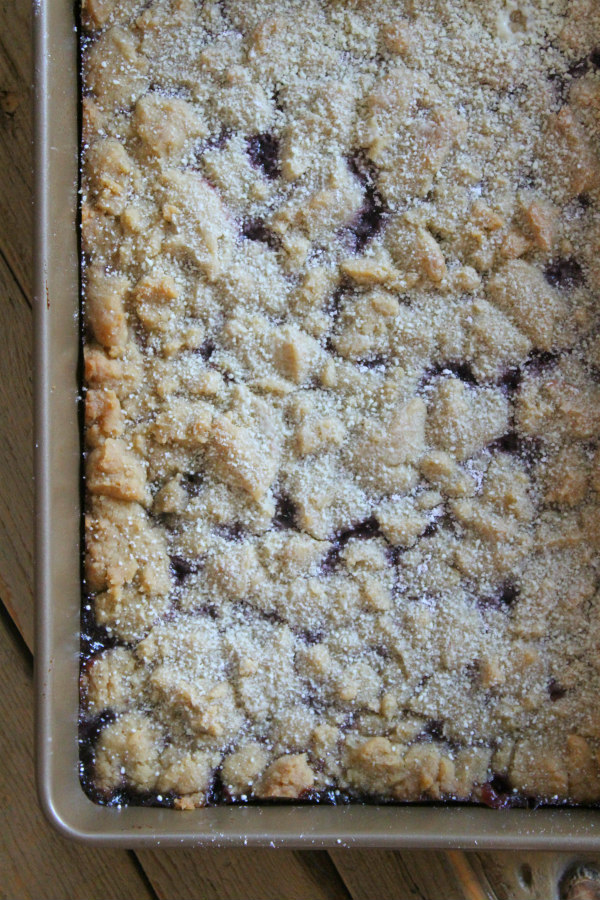 It comes out looking like this (with some powdered sugar sprinkled on top after cooling). I love how everything comes together as it bakes. There is just enough raspberry in the middle to give these bars a punch of sweet flavor in between that buttery shortbread crust. 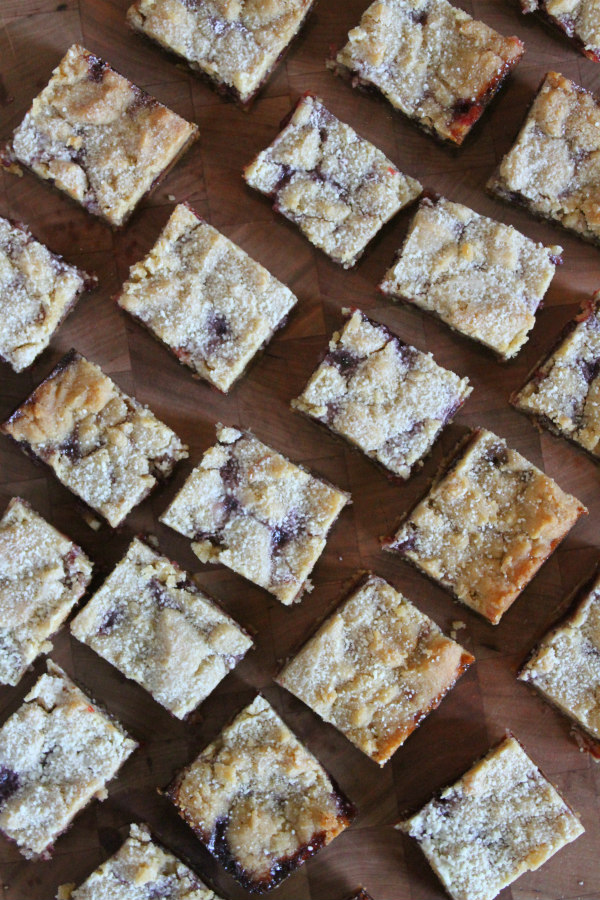 I like to let them cool completely before trying to cut them into bars.  Then you’ll get nice, clean cuts out of them.  The crust remains firm, so they’re easy to pick up and eat.  They won’t fall apart. 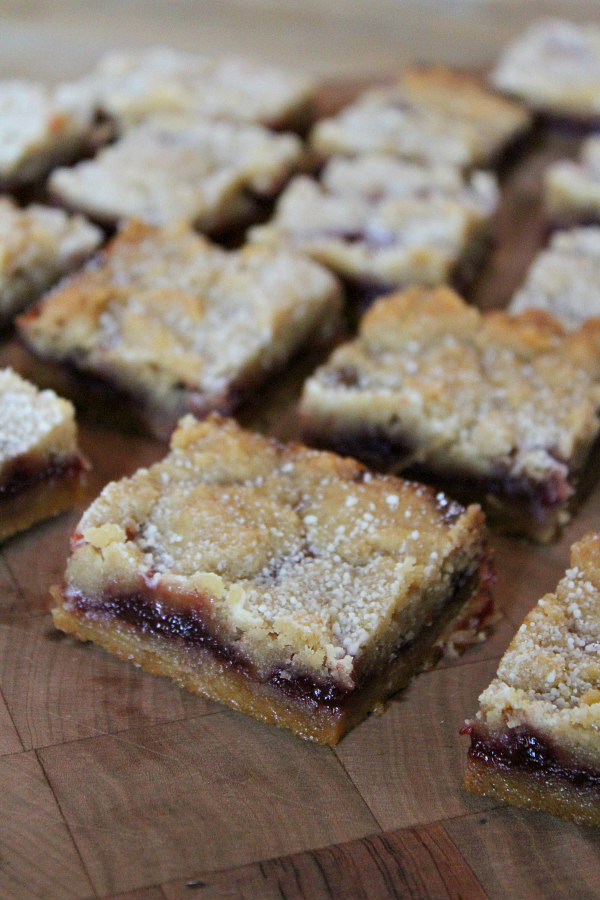 I put these on a platter for serving a couple of hours before my party… and Brooks kept coming into the kitchen and taking them off of my platter.  I told you they were addicting!! 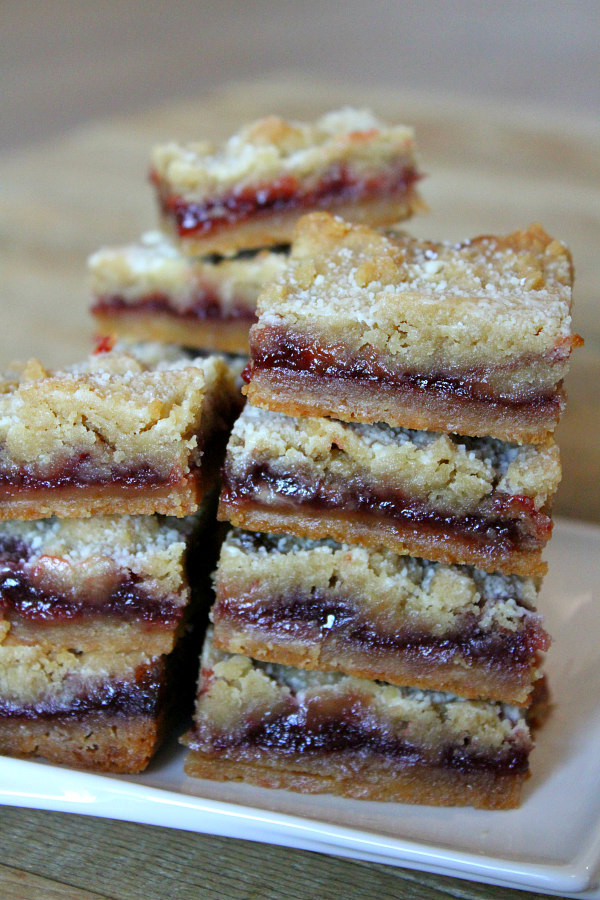 They freeze and defrost nicely.  So if you have leftovers at the end of your party, just put them back into the freezer in a covered container until you want to serve them next.  Enjoy

Here’s a photo of Brooks (in the purple) and his roommate… and me and roommate’s Mom helping them move into their dorm room at SMU.  Brooks really seems to love it so far.

He has a great group of friends, he’s looking to join a fraternity in the spring, and he’s keeping his grades up as a business major. I’ll be seeing him in a couple of weeks for family weekend.  Since we’ll be staying in Dallas for a week at an Airbnb, he has requested that I make dinner for him and NINE of his friends! We are excited to see him and meet his crowd.  Thanks for your support everyone-  Brooks is so appreciative, and he still loves his readers and his RecipeBoy blog! 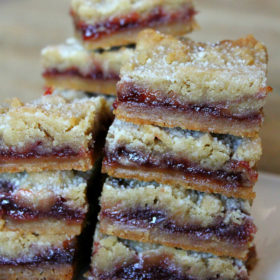 Should these be refrigerated if not using the same day?

These really are easy and I would have given them 5 stars except they were a little too sweet for my taste. Next time I will cut back on the amount of sugar in the shortbread by at least 1/2 C and probably closer to a cup. I will certainly try them again!

Can you use maragine or just butter.

We have not tried margarine, so not sure!

Could I use other jam, strawberry or peach? They look wonderful..

Excellent recipe!! Addictive!! They were super easy to make, and everyone at the party I took them to…went crazy for them! Thank you so much for sharing this recipe. I will definitely be making them again.