Snickerdoodle Blondies are one of the most delicious dessert bars I’ve ever made. It’s hard to eat only one! 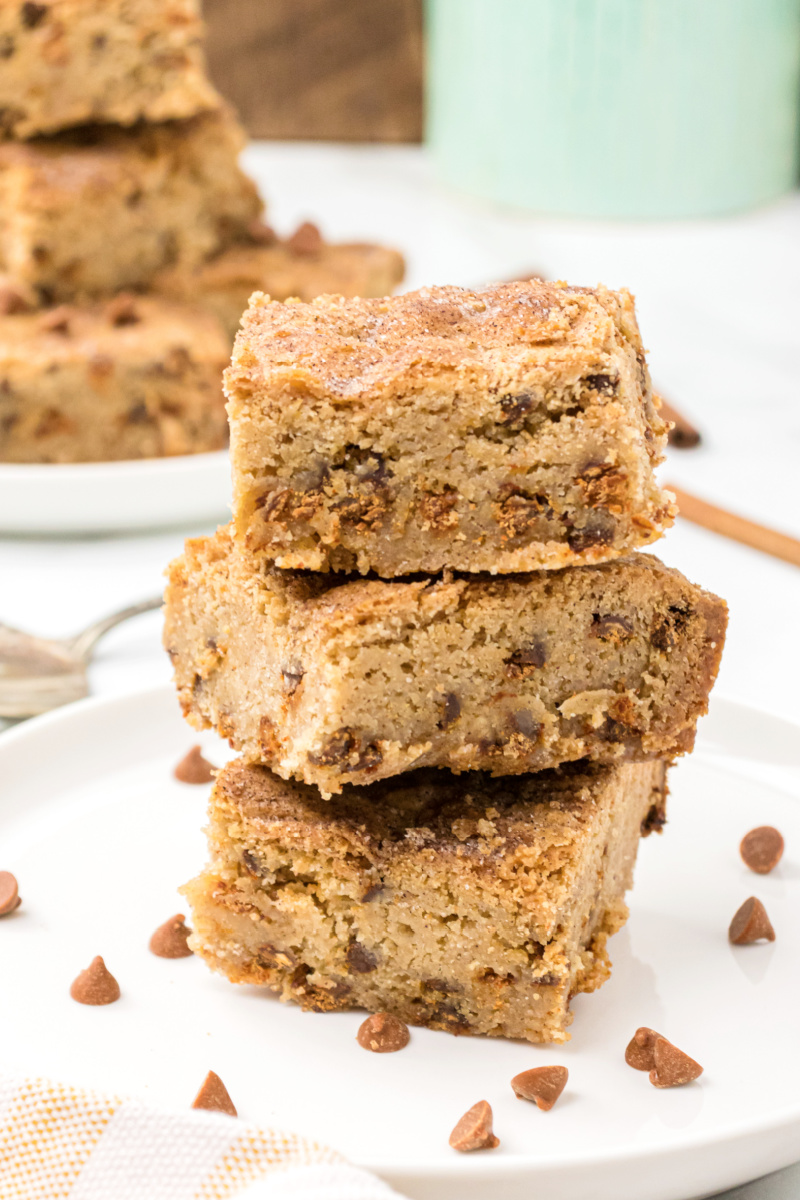 These blondies taste amazing with the cinnamon chips and cinnamon-sugar topping. There are a lot of flavors in this one dessert. I’ve brought these bars to many gatherings, and everyone always asks for the recipe!

You used to be able to find them alongside the chocolate chips at most markets. Now, they’re harder to find in the stores. Walmart and Target are your best bet. There might be others. You can always find cinnamon chips online. I usually order them in bulk, and just store them in the freezer. 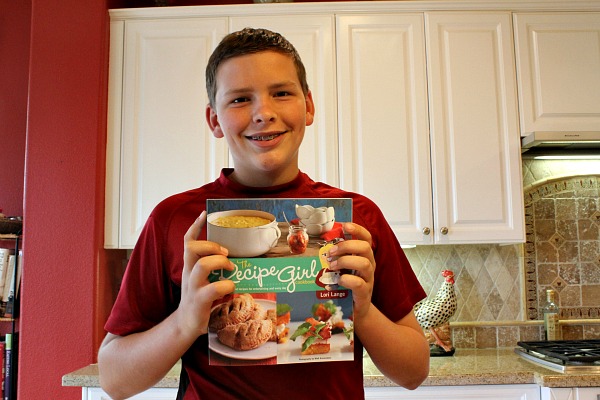 This post has been updated from its original publish date of 2013. My son Brooks (RecipeBoy) was 12 at the time, and here are a couple of quotes from him (which I treasure, now that he’s 20 years old!!)

My mom is awesome. Her first cookbook was published just the other day! I made Snickerdoodle Blondies from the Dessert chapter of The RecipeGirl Cookbook. Man oh man are they yummy.

There it is! My mom’s fantastic cookbook. (She mentions me a lot in it!) I’m so proud of my mom for putting so much time and effort into this cookbook. I want to be just like her someday! She got so stressed-out at times during the writing and editing of the book, so it was hard to be happy during the making of the cookbook. But now, my dad and I are very happy to have the real Lori Lange back! I love you mom! 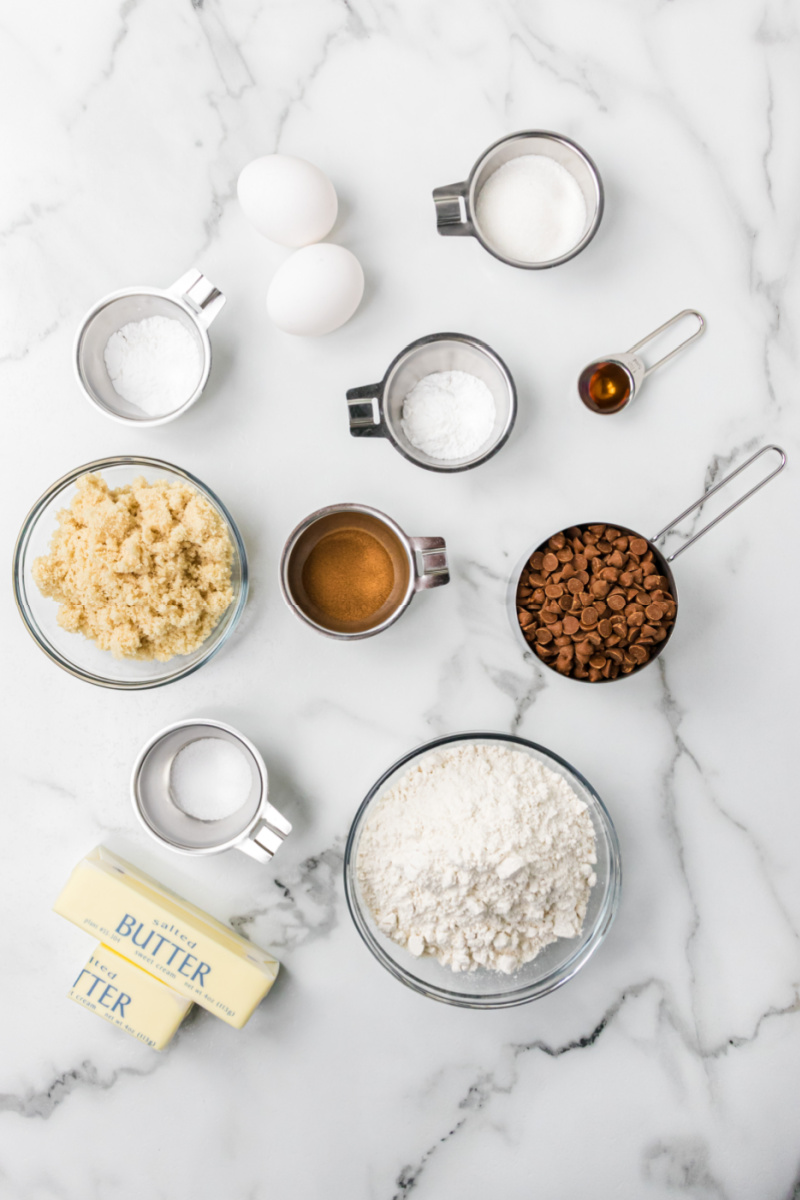 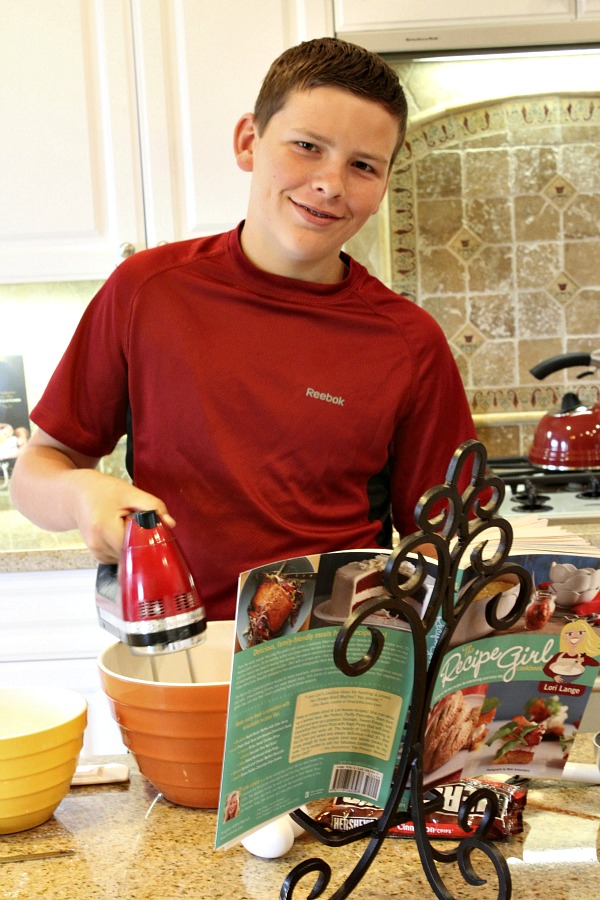 I’m just working away on this Snickerdoodle Blondies recipe while I occasionally look up at the book to see what to do next. The RecipeGirl Cookbook is one of my favorite cookbooks ever! Well, my mom is interrogating me on what other cookbooks I like, so I take that back. My mom’s cookbook is THE BEST cookbook I have ever seen. (My mom wanted me to make it uppercase so that everyone understands that fact). 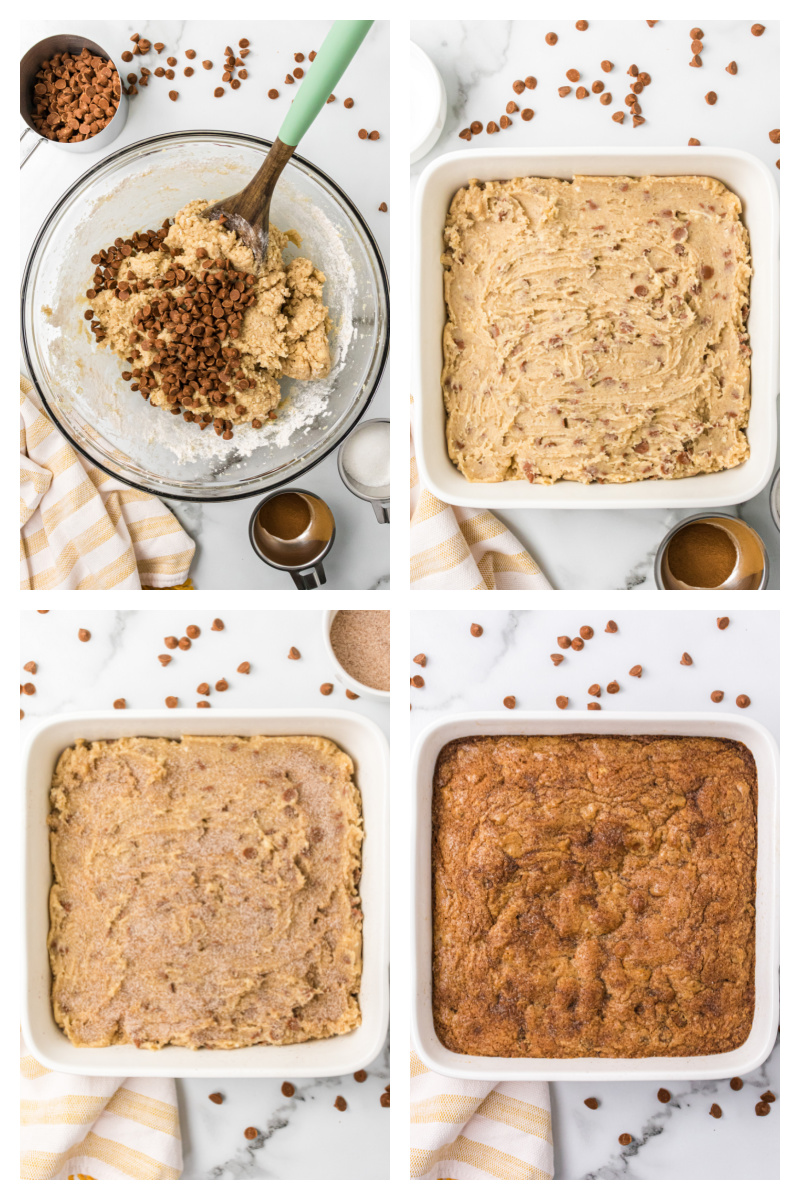 How to make Snickerdoodle Blondies:

The full, printable recipe is at the end of this post.

You will need a 9×9-inch pan for this recipe. Spray it with nonstick spray. Whisk together the dry ingredients. Use an electric mixer to combine the wet ingredients. Then combine the two and stir in the cinnamon chips.

Spread the batter into the pan. Top the batter with a cinnamon and sugar mixture. Then bake for 45 minutes. 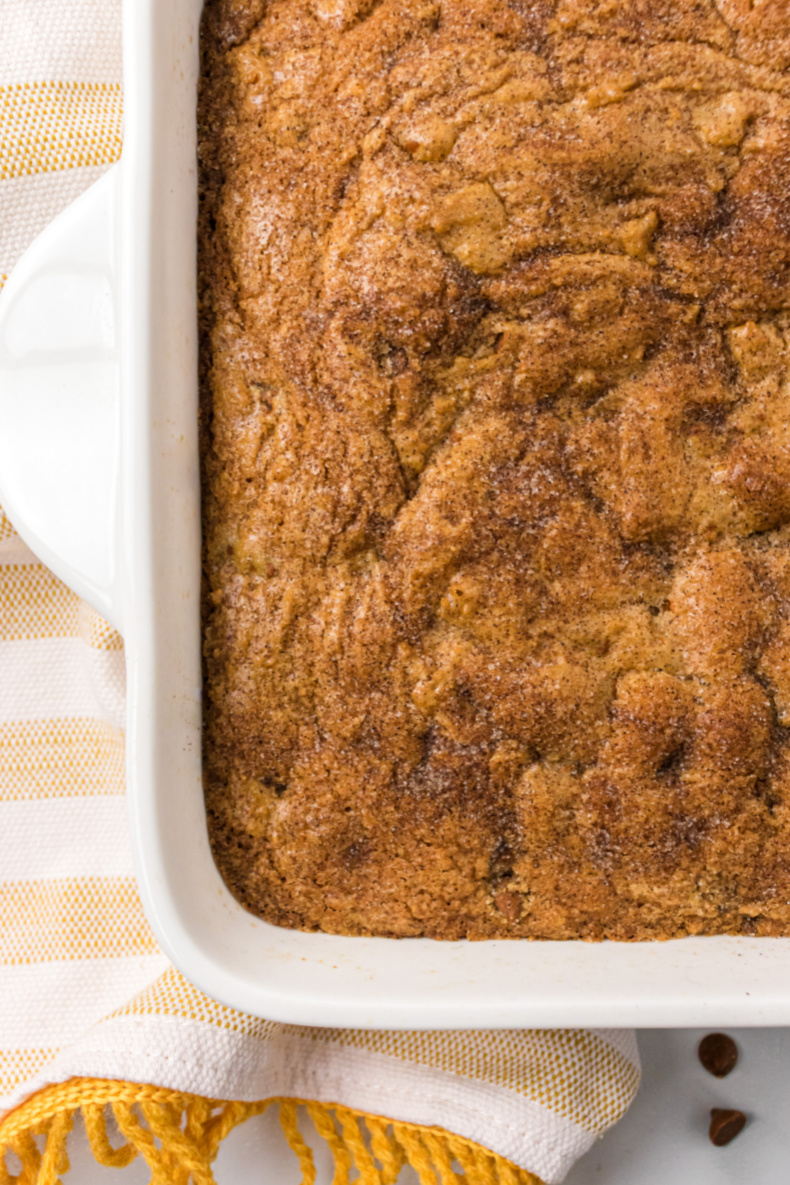 Honestly, they don’t look super impressive when they come out of the oven. But you have to taste them!! We have a recipe for Butterscotch Blondies that we really love a lot, but these are even better! 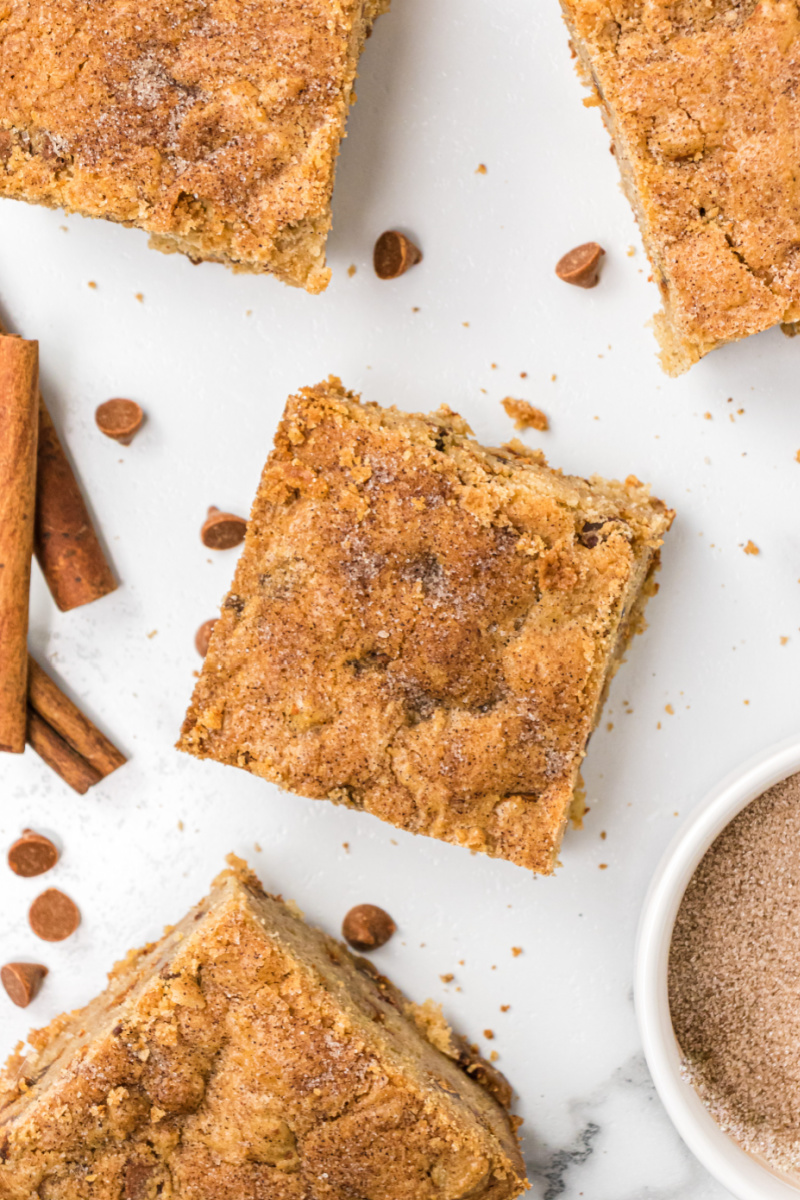 I’m obsessed with the cinnamon chips because they just add so much to these Snickerdoodle blondies. They are so good in everything from cookies to cakes to scones and more.

Here are a few more recipes to make with cinnamon chips: 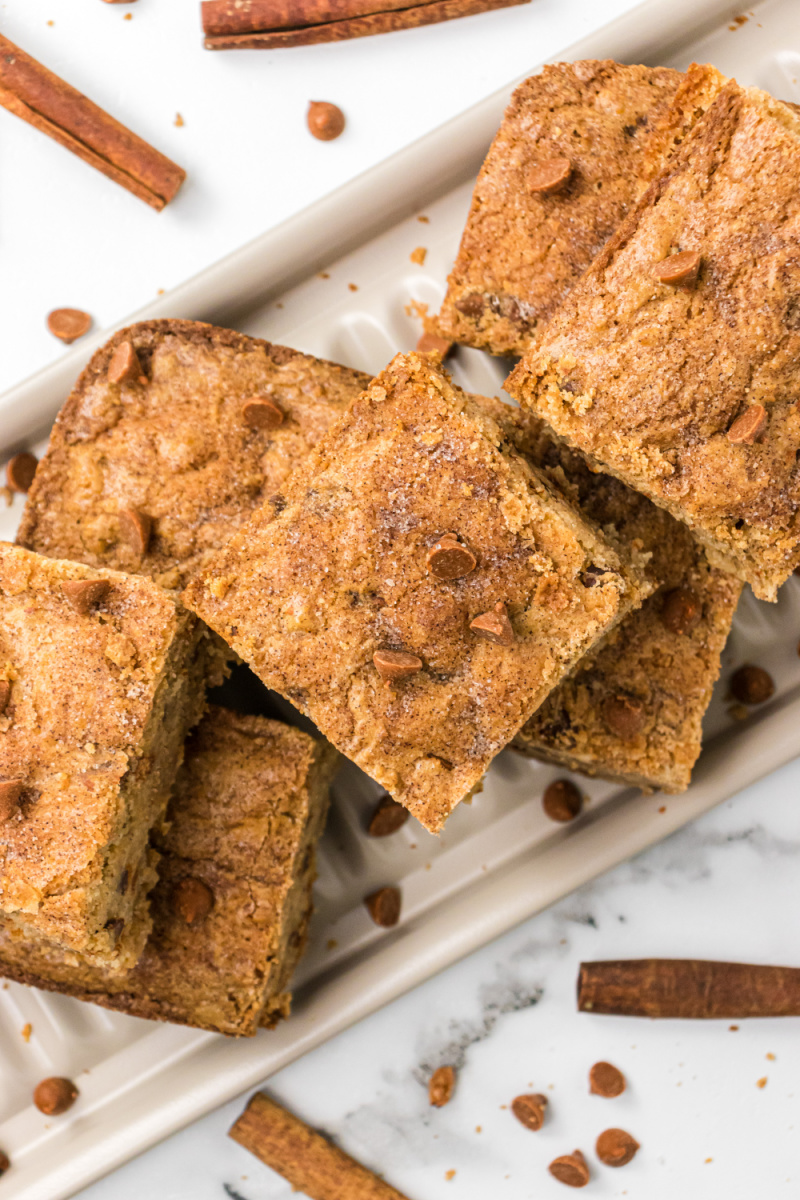 Store these Snickerdoodle Blondies in a sealed container for up to 3 days at room temperature. They freeze well too!  Just make sure they’re in a well sealed container, and you can freeze them for up to three months. Enjoy! 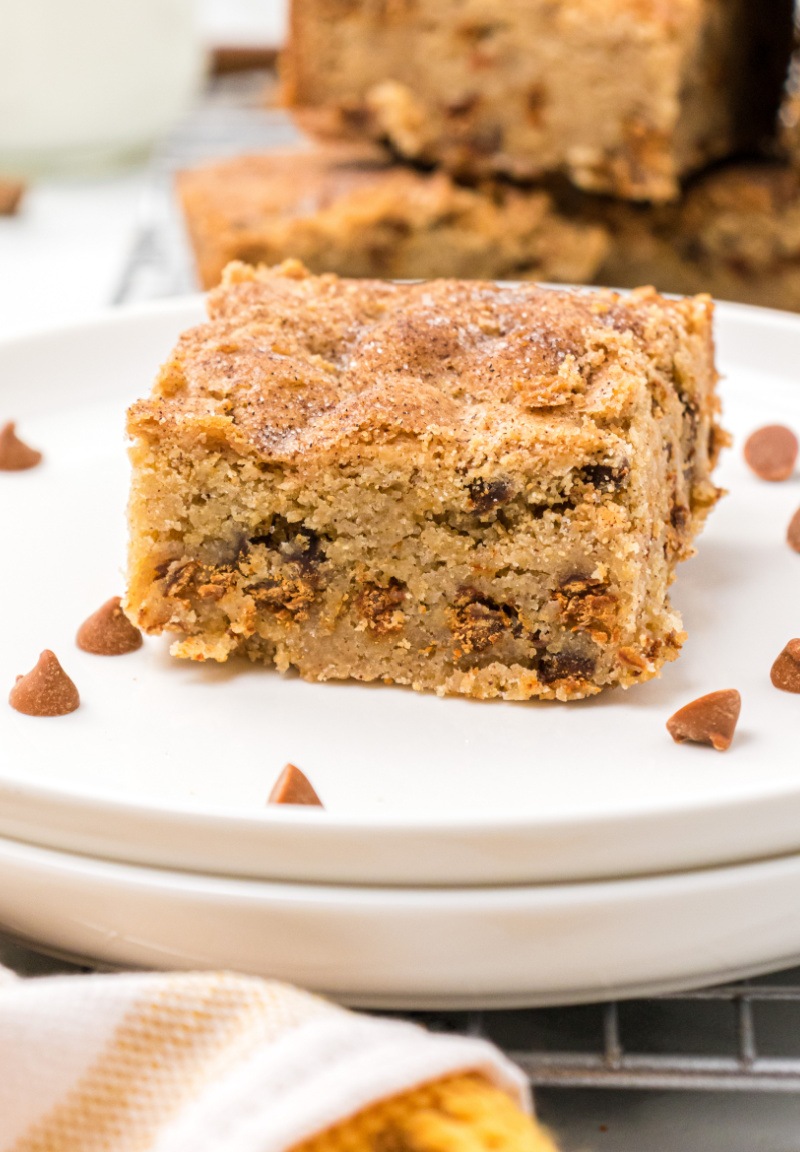 Try these Snickerdoodle Blondies. They are so good! 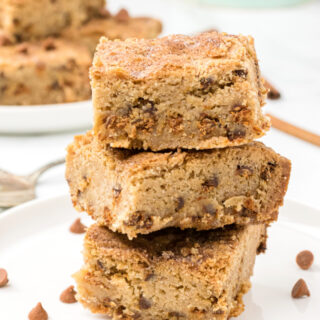 My favorite is the Pioneer Woman Cooks by Ree Drummond. Very tough to choose just one book though.