If any of you have not eaten an artichoke before, you might think you have to take a bite out of it. BEWARE: This is FALSE information. Today I will teach you How to Prepare and Eat an Artichoke. 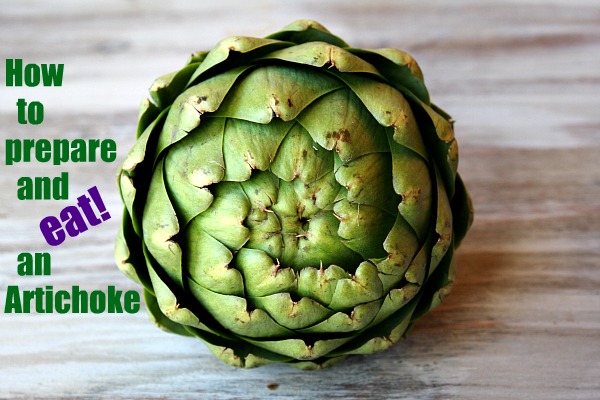 Artichokes are spiky, so I don’t think anyone would want to take a bite out of this vegetable. 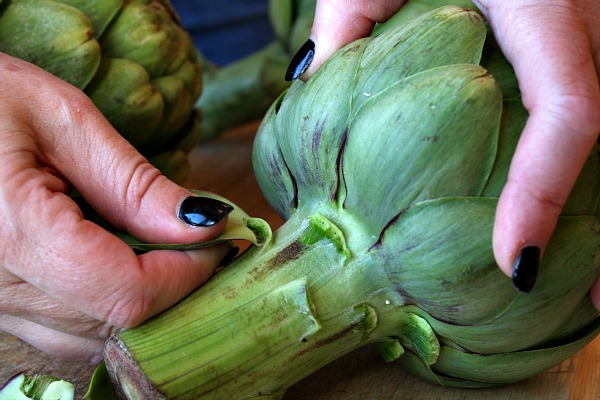 You need to take off the very first layer of leaves because they are too tough to eat. 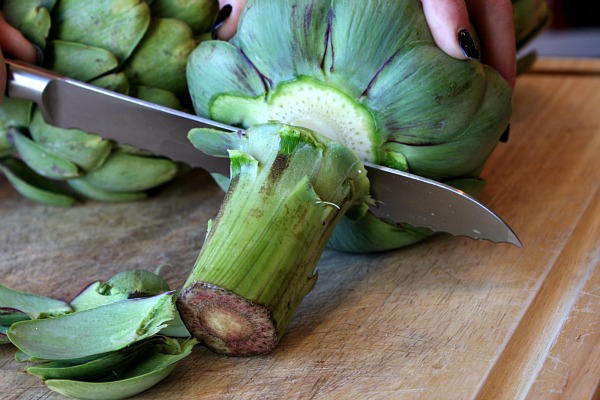 Chop off the stem as close as you can to the leaves but without cutting any off. 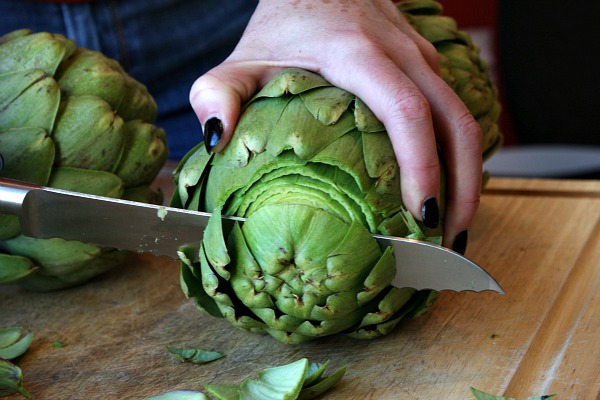 Cut off the top of the artichoke so that it can steam better and most of the spiky leaves are gone. 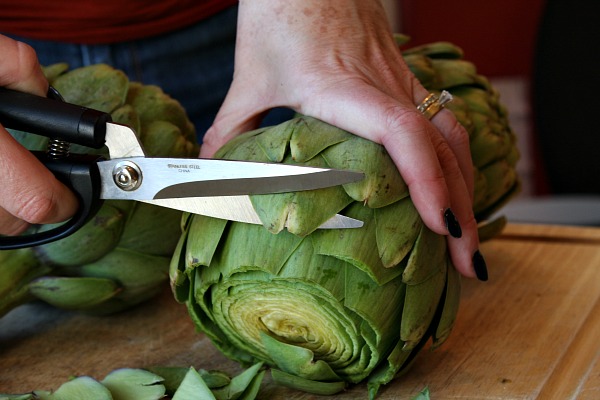 Clip off the rest of the spiky leaves. You don’t want to eat spikes! 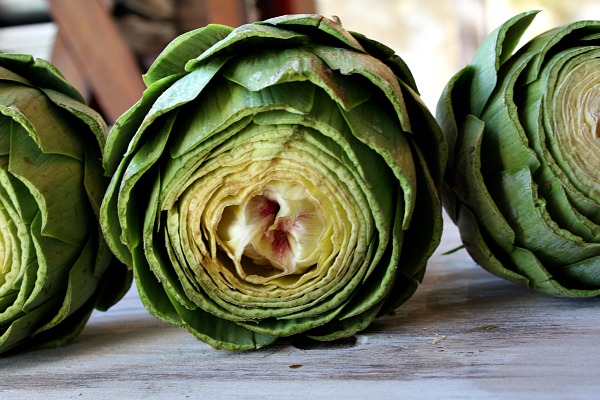 The three artichokes that I am making are ready to steam. 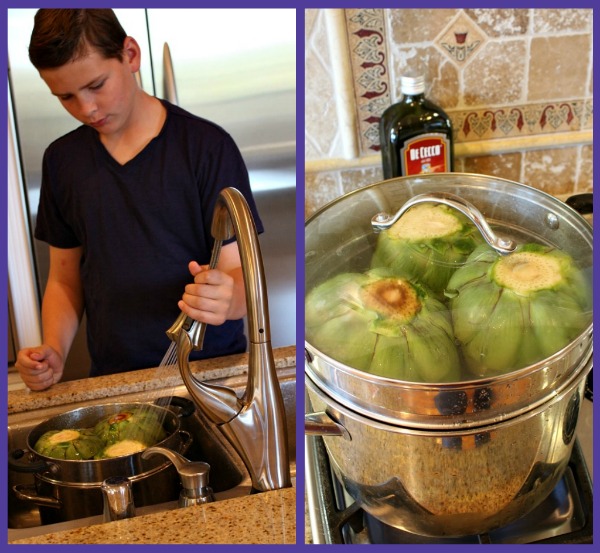 You have to put the artichokes- top side down- in a large pot with a steamer insert and add about an inch of water to the bottom of the pot. Put the lid on. Then you can put the stove on high until the water starts boiling and then just let it simmer on low for 50 minutes to 1 hour (Until a fork slides into the bottom of an artichoke easily). After your artichokes are done, you can remove them from the pot and set them on a plate to cool. 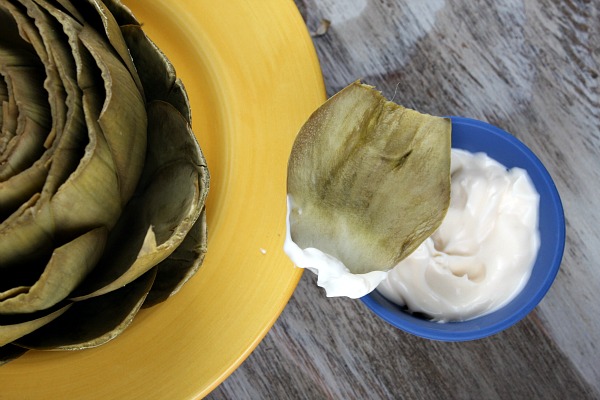 You eat the artichokes by peeling off the leaves and scraping off the flesh with your front teeth. Mayonnaise is a popular option for dipping the artichoke leaves in. If you don’t like mayonnaise, you can also use melted butter. 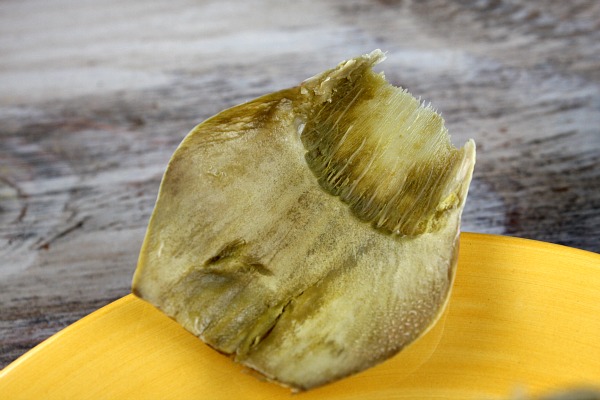 After the flesh of the leave is in your stomach, you can put the remains in a plastic bowl for later disposal. 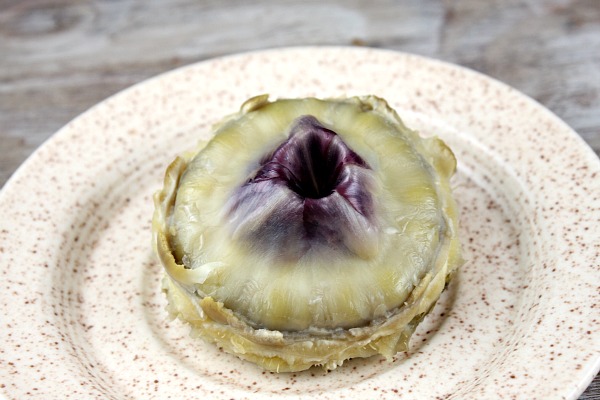 DO NOT EAT THIS PART!!! Scrape this whole part out with a spoon. 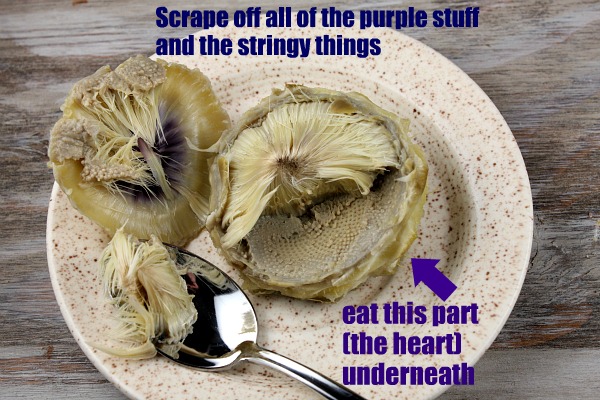 After you have scraped the purple stuff and stringy things off, you can eat the heart of the artichoke (the part underneath). I personally do not like this part, but my family does.

Hopefully I have introduced a new vegetable to all of your “Favorites’ Lists.” I love artichokes but usually I get so anxious to eat them because of the good smell wafting through the house for the hour or so while they are simmering.

And even a kid can teach people how to prepare and eat certain vegetables… Like Me!

How to Prepare and Eat an Artichoke

I used to make these by trimming the artichokes, then steaming them for like twenty minutes. Next I would spread their leaves, then sprinkle minced garlic in those leaves. I would stand them back in the pot, cover them then continue steaming until tender. Serve with butter or garlic butter.

Hello, just wanted to tell you, I enjoyed this post. It was inspiring. Keep on posting!

Wonderfully illustrated and easy to understand. Thanks so much for sharing. Looking forward to eating my steamed artichoke!

I steam mine right side up with pickling spice in the water. After about 30 minutes, I drain the liquid and pour it through a sieve (to keep the pickling spice out) over the artichokes. I drizzle with olive oil then pour boiling water over to rinse most of the oil off. Then I continue to steam them until done. They come out beautifully glazed and the taste is out of this world. I serve them at room temperature as an appetizer.