This Funfetti Cheesecake Cake has two layers of funfetti cake with a layer of cheesecake in the middle.  It’s covered with cream cheese frosting. 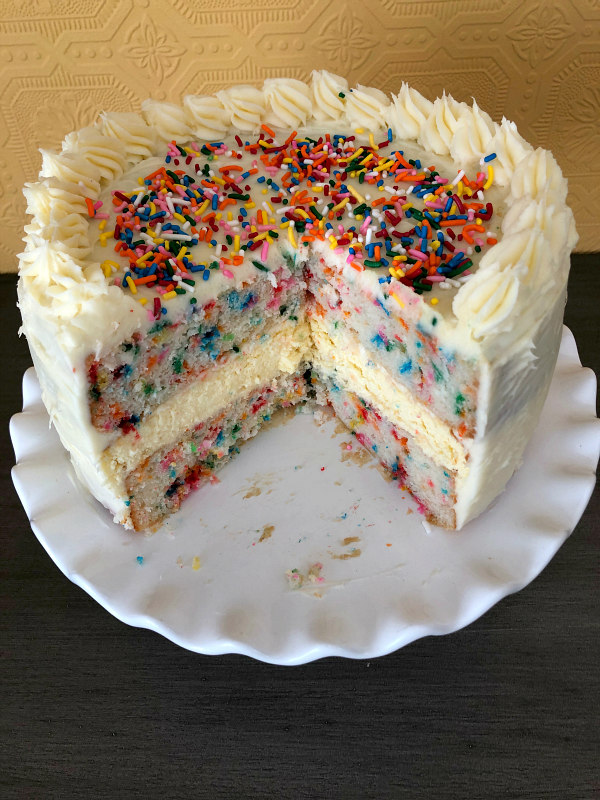 Hey everyone!  RecipeGirl (RecipeBoy’s Mom here) sharing a cake I made for Brooks’ 18th birthday.  EIGHTEEN!  I know it’s crazy.  This kiddo started RecipeBoy when he was ten.  My husband and I gave him the blog for his tenth birthday.  And now he’s 18, and getting ready to go to college.  I can’t believe it has been ten years.

Brooks has had a very busy senior year getting college applications done and finishing up a rigorous course schedule.  He’s very excited to share a post with you (coming up soon) about where he’s choosing to attend college.  In the meantime, let’s celebrate his 18th birthday with this Funfetti Cheesecake Cake!

I had an idea for how to celebrate his birthday, so I started planning it a couple of months ahead of the big day.  He got 18 gifts with 18 balloons.  I purchased a wide variety of gifts (umbrella for college, food gift cards, t-shirts, summer clothes, cash, book, college bookstore gift card, cologne, etc).  When he got up in the morning, he walked down the hallway and opened each gift. 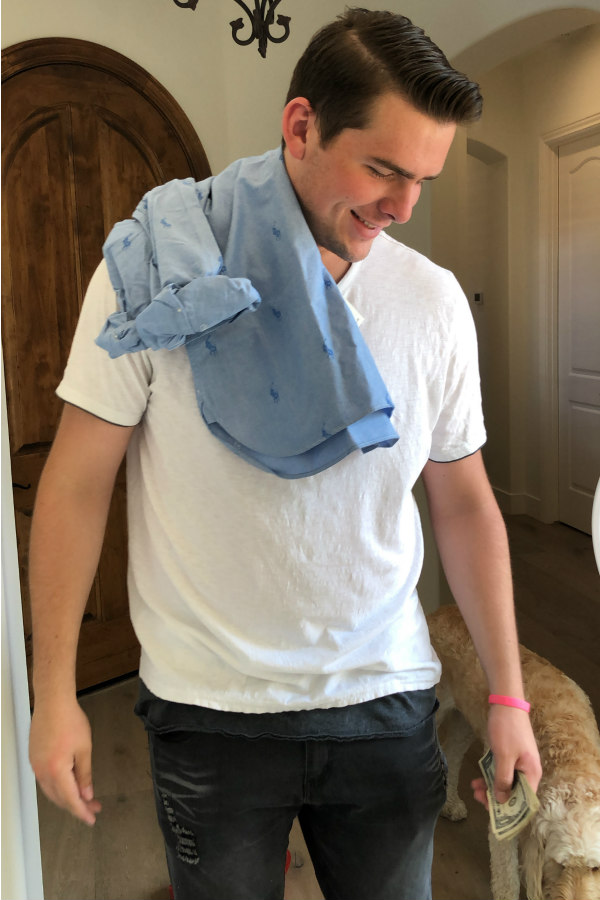 The trail of balloons and gifts ended at the kitchen table, where I had photos from all of his birthdays from age one to age seventeen.  It was a fun trip down memory lane.  We sat down and talked about what we did for each birthday and who was there. 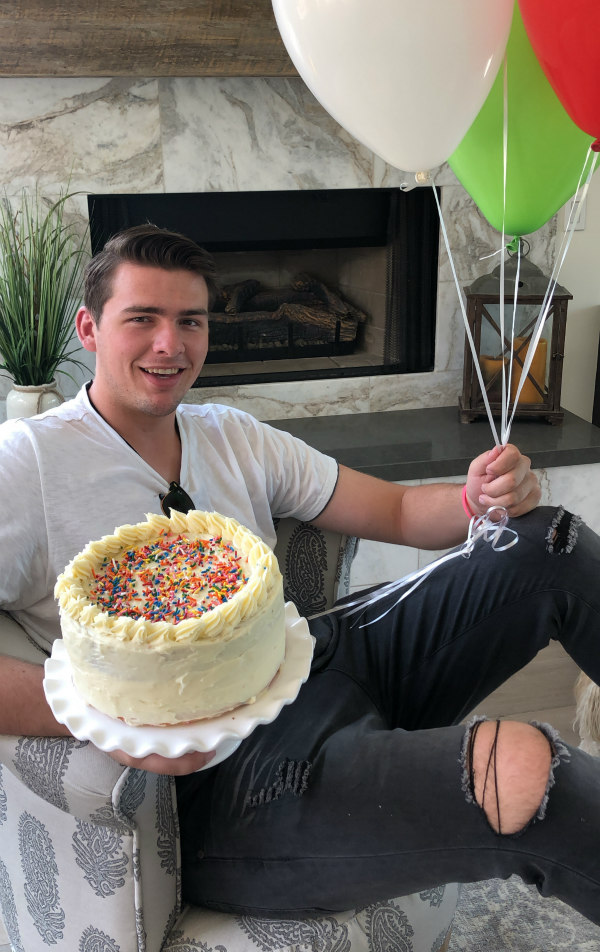 It was a pretty fun birthday morning for this 18 year old! 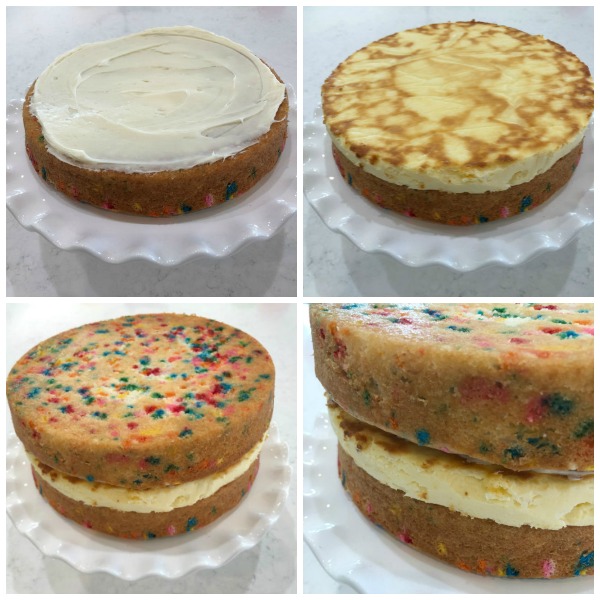 Now, let’s talk about this Funfetti Cheesecake Cake.  It’s really very simple to make.  I baked a Funfetti cake.  The recipe calls for the boxed kind of Funfetti cake, but it’s jazzed up with some extra ingredients so it tastes a lot better than a regular boxed cake.  I also baked a simple vanilla cheesecake.  The cheesecake is placed in between the cake layers- adding a delicious filling between the cakes! 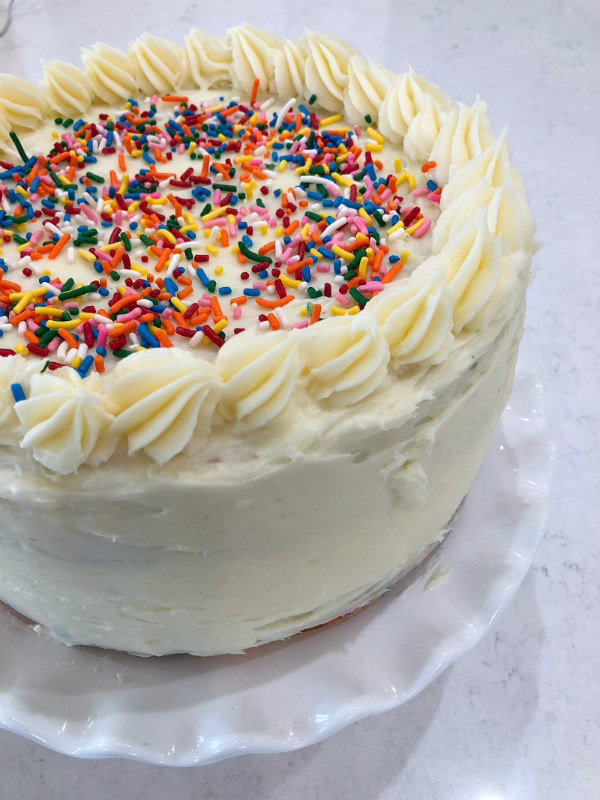 And I covered the whole cake with cream cheese frosting.  It’s so delicious! 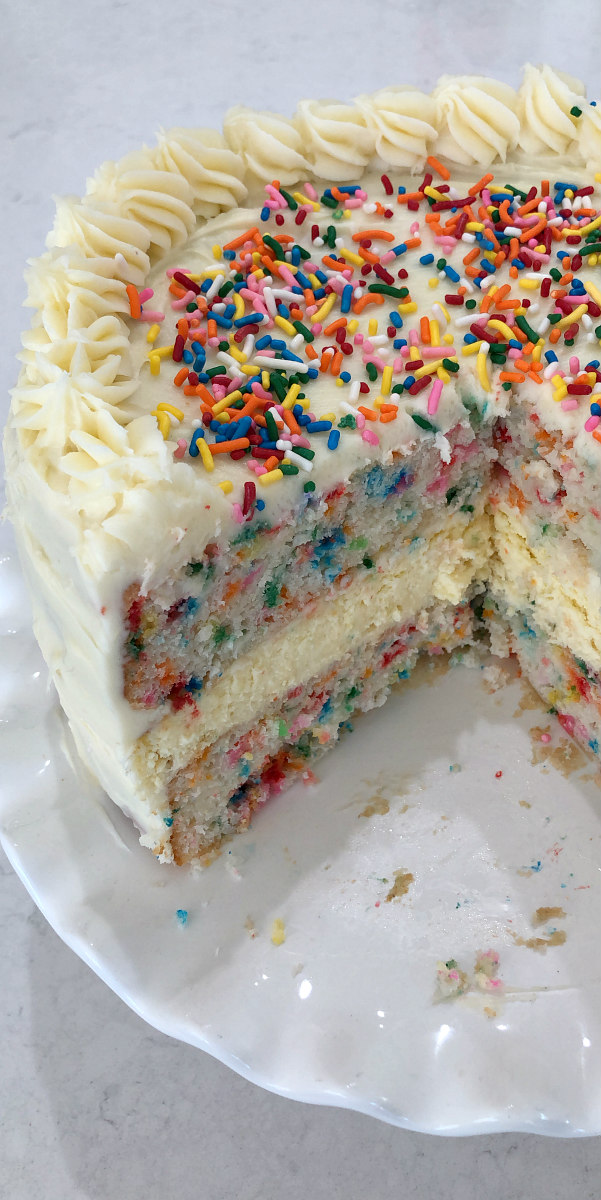 This cake was a very big hit on RecipeBoy’s 18th birthday.  He loved it.  And he was very appreciative of the amount of effort that Mom put into creating a special birthday morning for him!!

Stay tuned… RecipeBoy will be posting here in a few weeks sharing all about his plans for college.  They grow up too quickly, don’t they??

Here are a few more cake recipes that can be used for special celebrations:

This cake looks awesome and I'm going to attempt it for my husband's 31st birthday today! Do you do a crumb coat when making this, and also to get the sides all fancy and even should I possibly make a double batch of frosting or would the one batch be plenty? Thanks! - Cassy

Sorry I missed this- how did it go?

You do not need to make the cheesecake in a water bath. If it cracks-- it doesn't matter because you won't see the cracks. You can assemble the cake using the frozen cheesecake. It will defrost in the fridge.

Cheesecake layer fell and did not maintain its thickness uniformly. Quite sure I followed directions and am very experienced in making cheesecakes.  Only thing that might have affected it was that I used cream cheese that had been frozen and was thoroughly thawed and at room temperature.

Nope- just follow the recipe as indicated, using the cake mix as an ingredient.

What a great way to celebrate Brooks' 18 birthday! Enjoyed this story, and the cake looks epic. Thank you and Happy belated Birthay, Brooks!

oh, how he's grown. I have been following this blog too, for a very very long time. Glad to see him growing up!