This New England Clam Chowdah (otherwise known as clam chowder) is thick and creamy, and it’s topped with plenty of bacon! 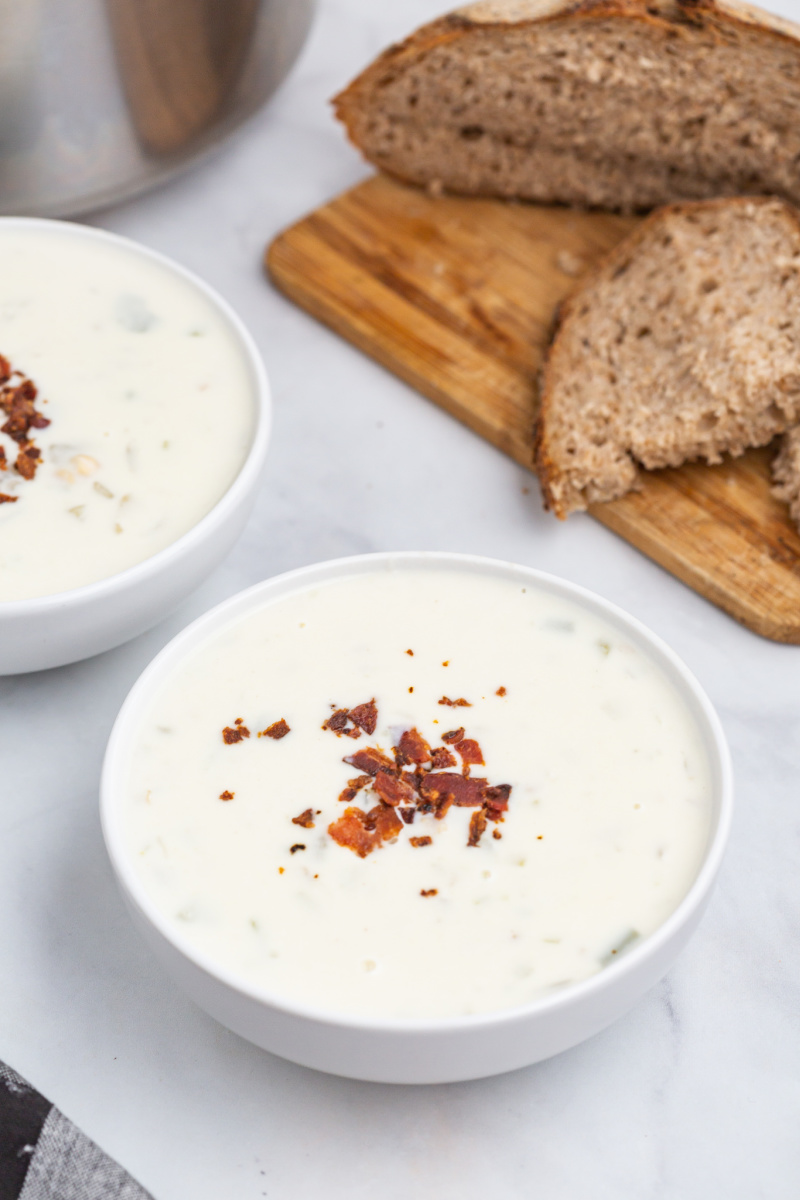 Clam chowder has a special place in the hearts of everyone in our family. We have some connections to the East coast. My husband grew up in Connecticut, and he spent his summers vacationing on the south shore of Boston. When I met my husband, I started spending summer there too. And when our son Brooks was born, we all began to spend summers near Boston. So we’re all deeply affectionate toward New England Clam Chowdah! We’ve tried every kind of clam chowder out there, so this recipe encompasses everything we love in a good clam chowder. 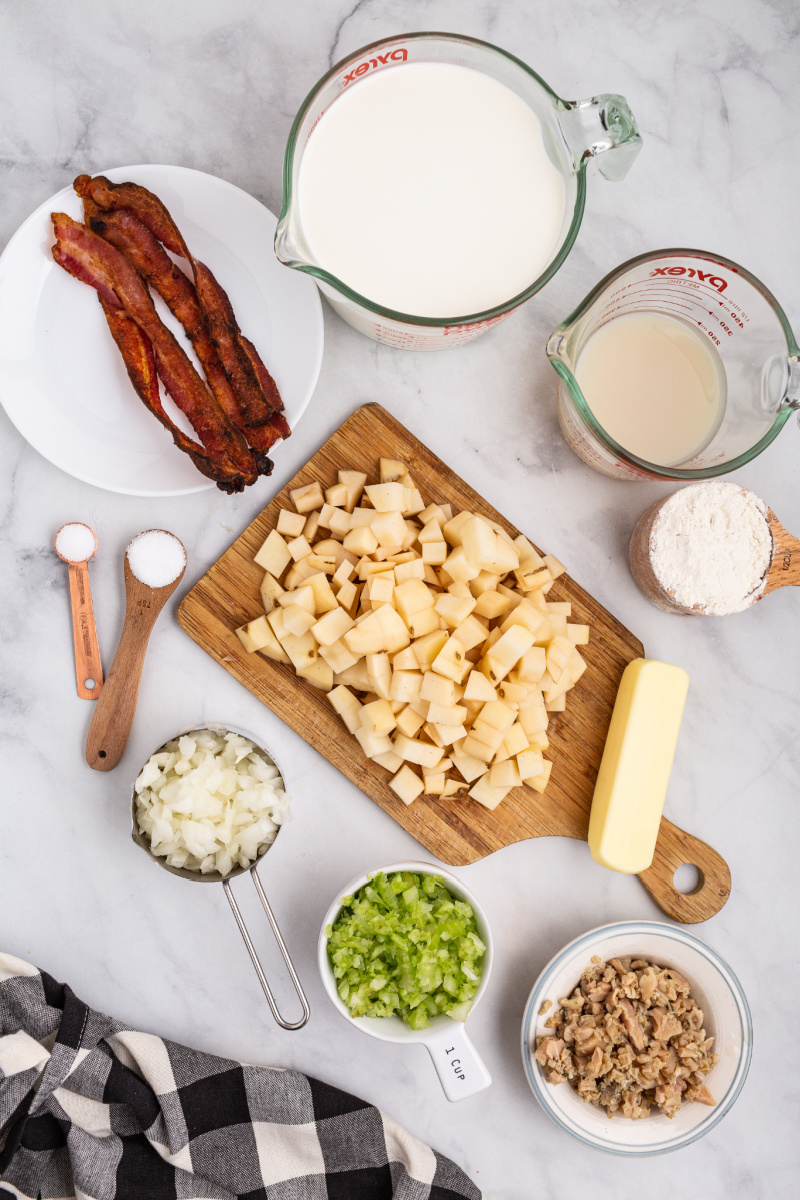 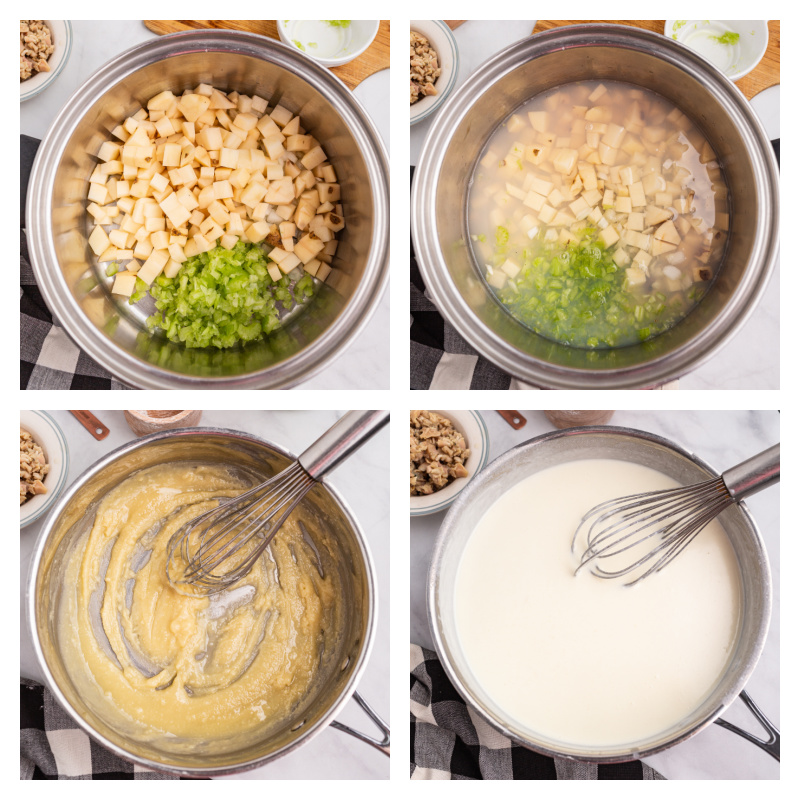 Onion, celery and potatoes are added to a large saucepan. Clam juice and water are added to the pan to cover the veggies. A little bit of salt is added, and then it’s brought to a simmer.

Once the veggies are done simmering, prepare the white sauce. Melt butter in another pan, and whisk in flour. Add both milks, and whisk until thickened. If you want your chowder to be thick and rich, use half in half instead of whole milk. 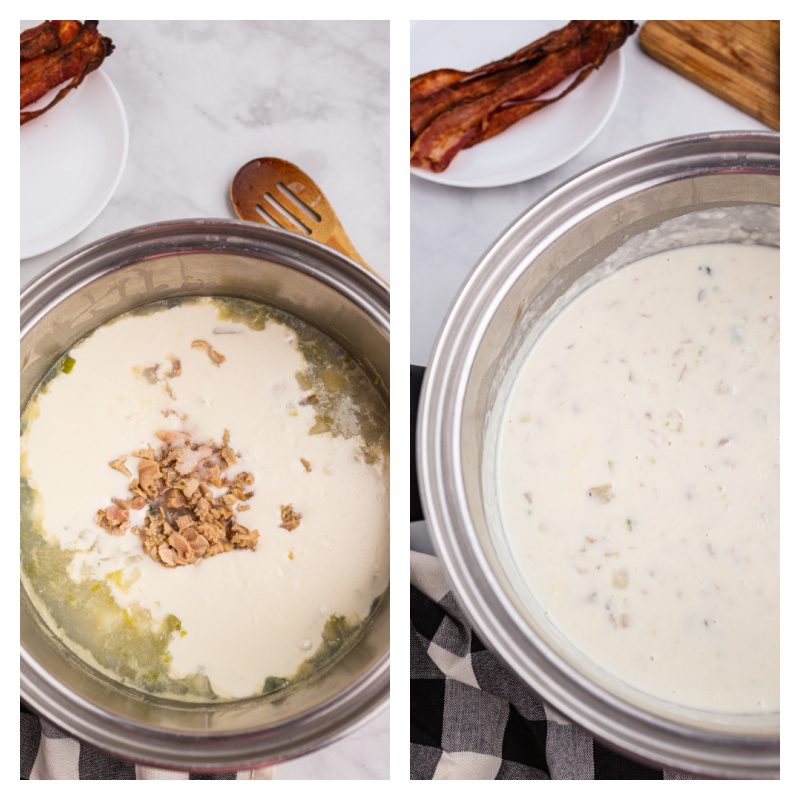 Then pour the white sauce into the pan with the simmering veggies. Add the clams too. Season with salt and pepper. And your New England clam chowdah is done! 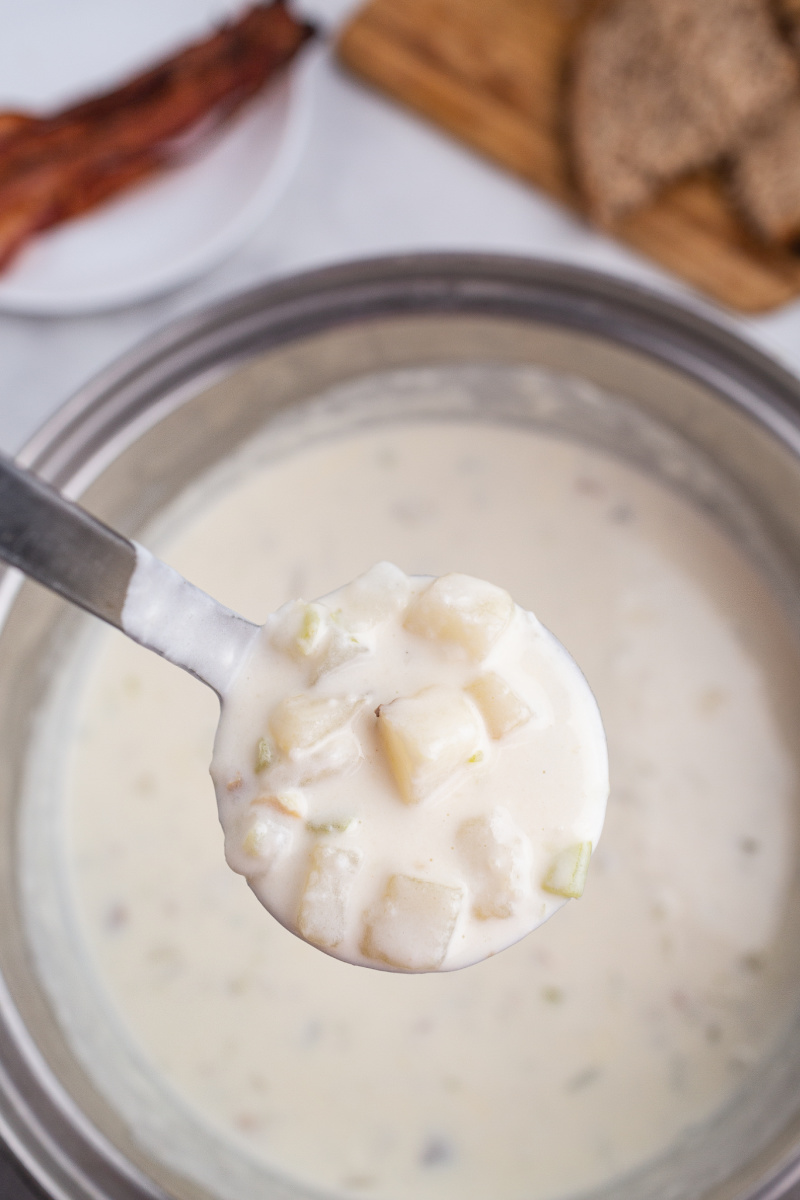 The texture is thick and creamy and wonderful. The potatoes are tender (sometimes I like to use unpeeled red potatoes). And there are chunks of clam in there to enjoy too. 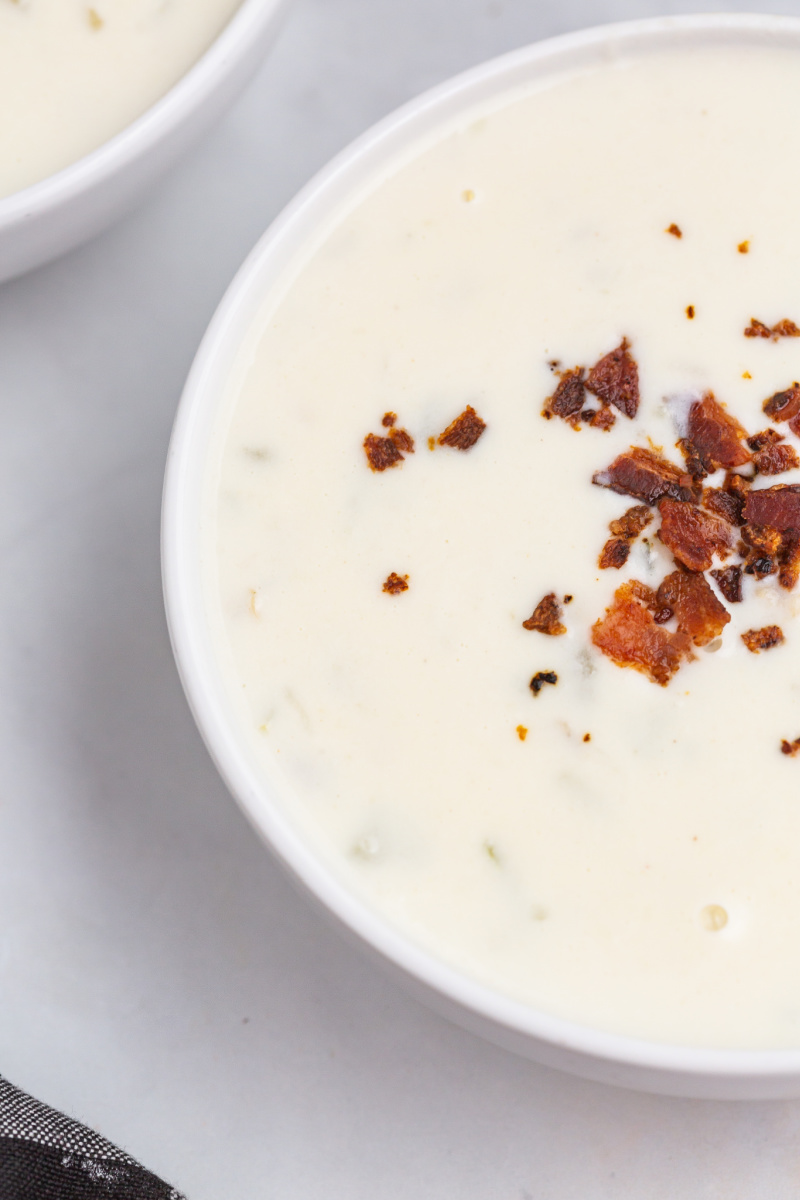 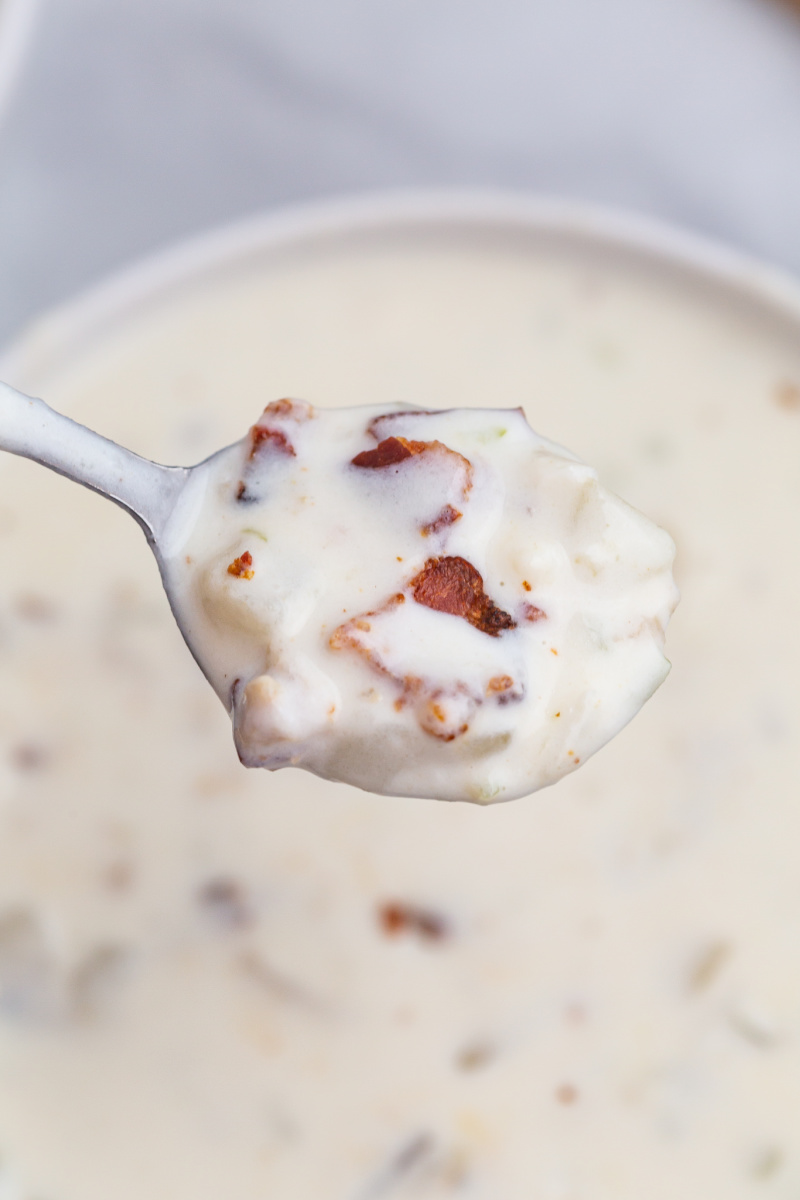 If you love chowder, you might also like to try my Sausage and Corn Chowder or this Easy Chicken Corn Chowder. 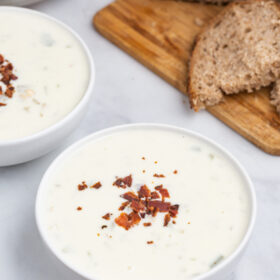 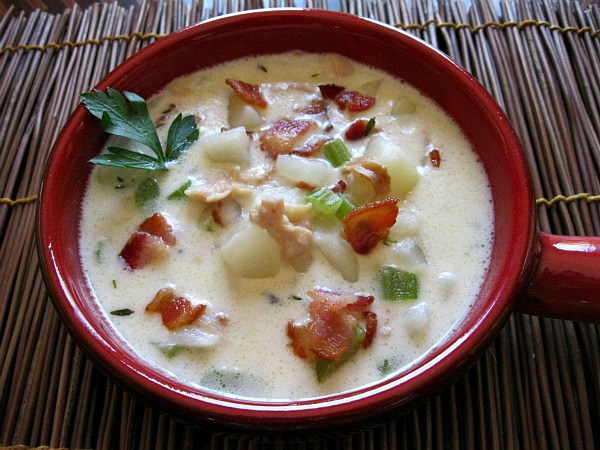 How about using Swanson's cream starter in place of the non-fat milk? Has anyone used that? I would like to know if it gives a good result as I haven't tried it yet.

I haven't tried it but I'm pretty sure you can find non-fat milk at every market in the United States, so that's what I would use.

Brooks, your blog has inspired my boys 3 and 4 to help me more in the kitchen! They just love checking out your page. Try using more clam juice for your broth (still with the flour and butter) but then add 1 cup of heavy cream instead of the other milks. I make several cream soups with a base like this and the cream paired with the stock (in this case clam stock) is amazing. And 1 cup of cream has less calories than 4 cups of milk! Keep up the great work.

This looks yummy. Maybe you could make it for me while I'm there. Looks like it could easily be made gluten free! love

I'm with you, bacon is the best. And this chowder, wow, another touchdown for Recipe Boy!

Looks delicious! Clam chowder is one of my favorites, too.