Grammy’s Easy Tuna Casserole is a family recipe. You won’t need anything fancy to make this recipe. It’s meant to be simple, and it’s delicious! 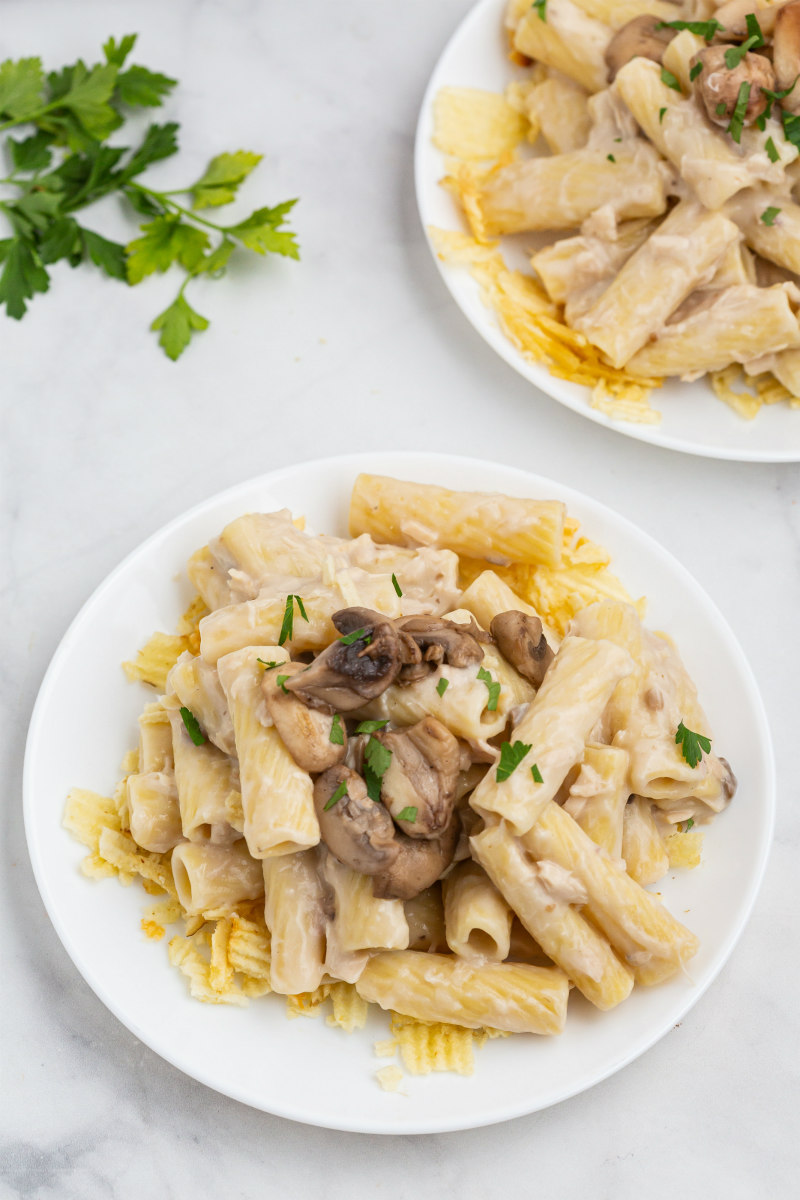 RecipeBoy’s Grammy used to make this Easy Tuna Casserole for her children when they were little, so RecipeBoy made it for his Grammy when he first started this blog back in 2011. The recipe has been re-photographed and re-published in 2020. It’s still a family favorite! 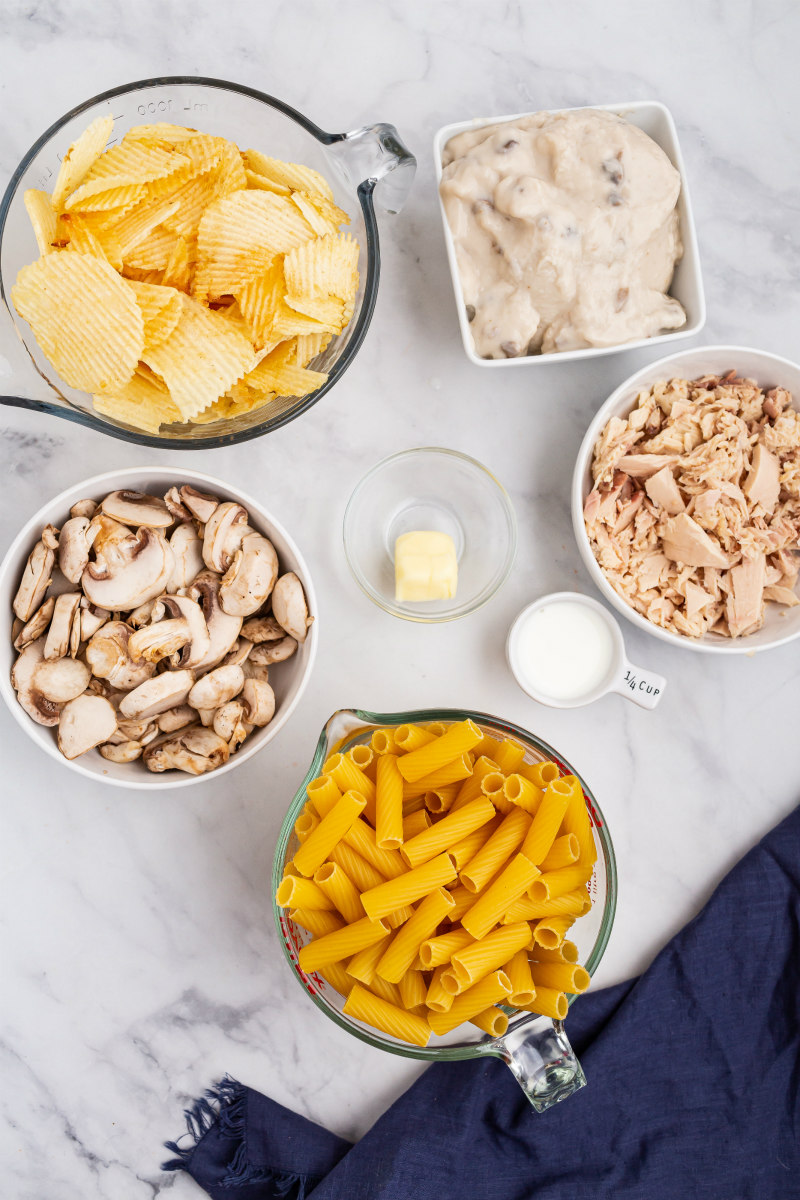 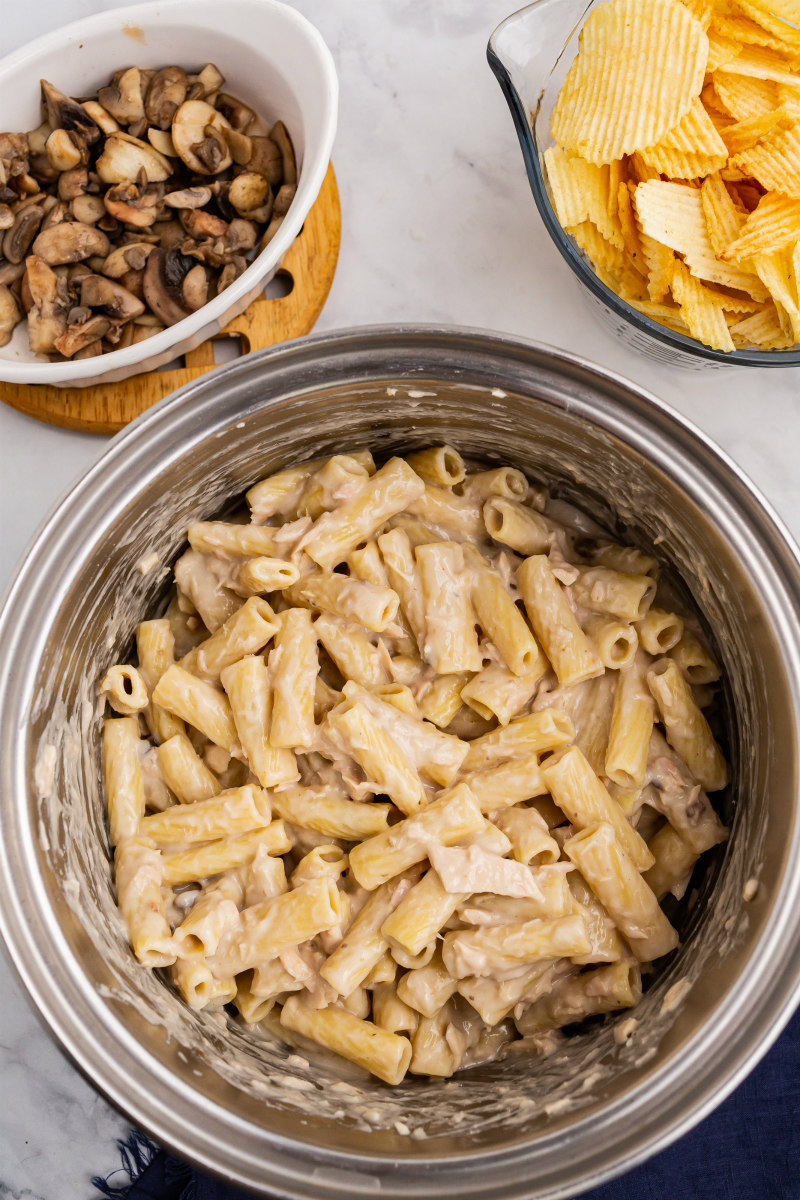 How to make Easy Tuna Casserole:

Cook the pasta according to the package instructions, and then drain it. In a separate pan, sauté the mushrooms in some butter until softened.

In the empty pasta pot, heat the cream of mushroom soup with some milk. Then stir in the pasta and tuna. 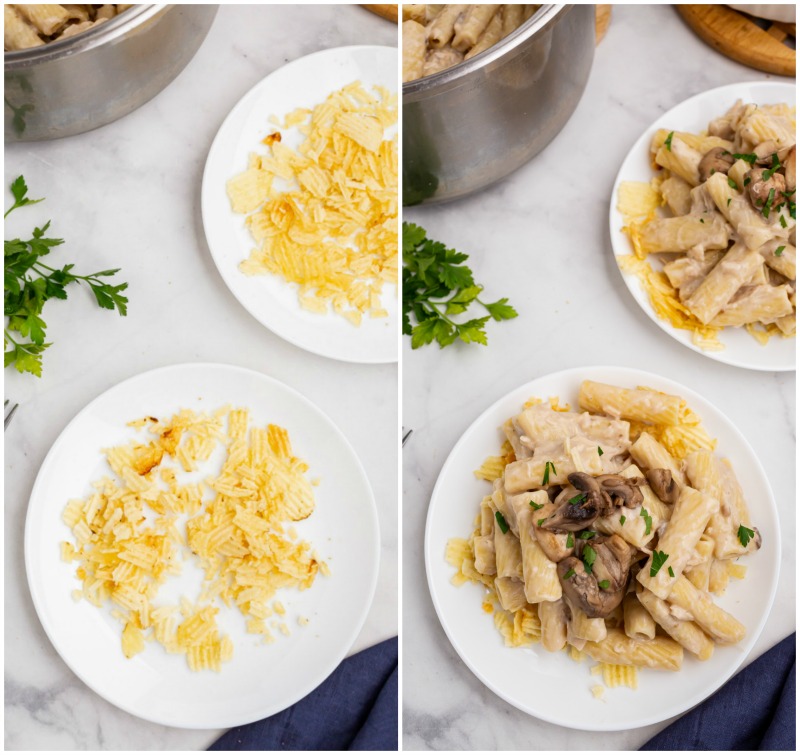 How to serve Tuna Casserole:

Before you eat the casserole, you need to put a generous amount of potato chips under it.  Grammy suggests using Ruffles potato chips. Just crumble them up and sprinkle them on a plate.

Spoon the pasta/tuna mixture on top of the potato chips. Add mushrooms. Sprinkle a little fresh parsley on top to make it look pretty. 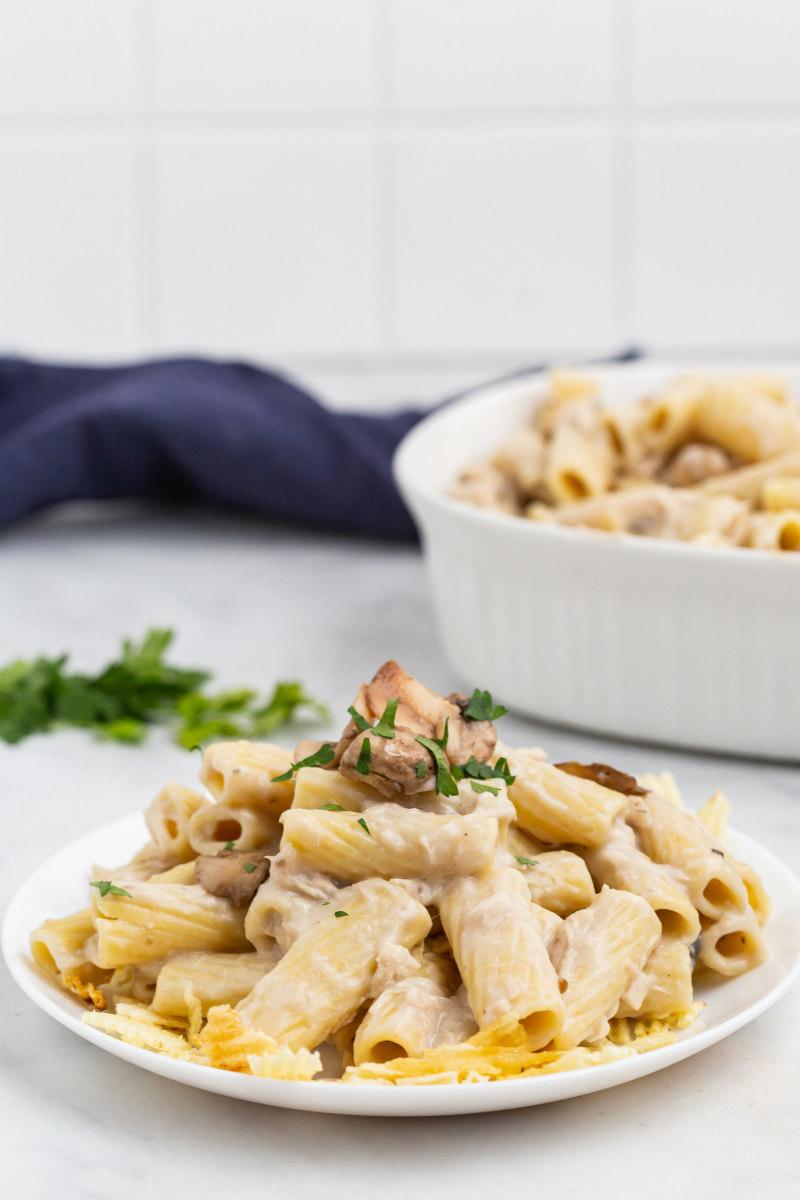 This Easy Tuna Casserole is creamy, delicious comfort food. There are no fancy ingredients at all. Sometimes you just need an easy-to-make meal, and this is it! 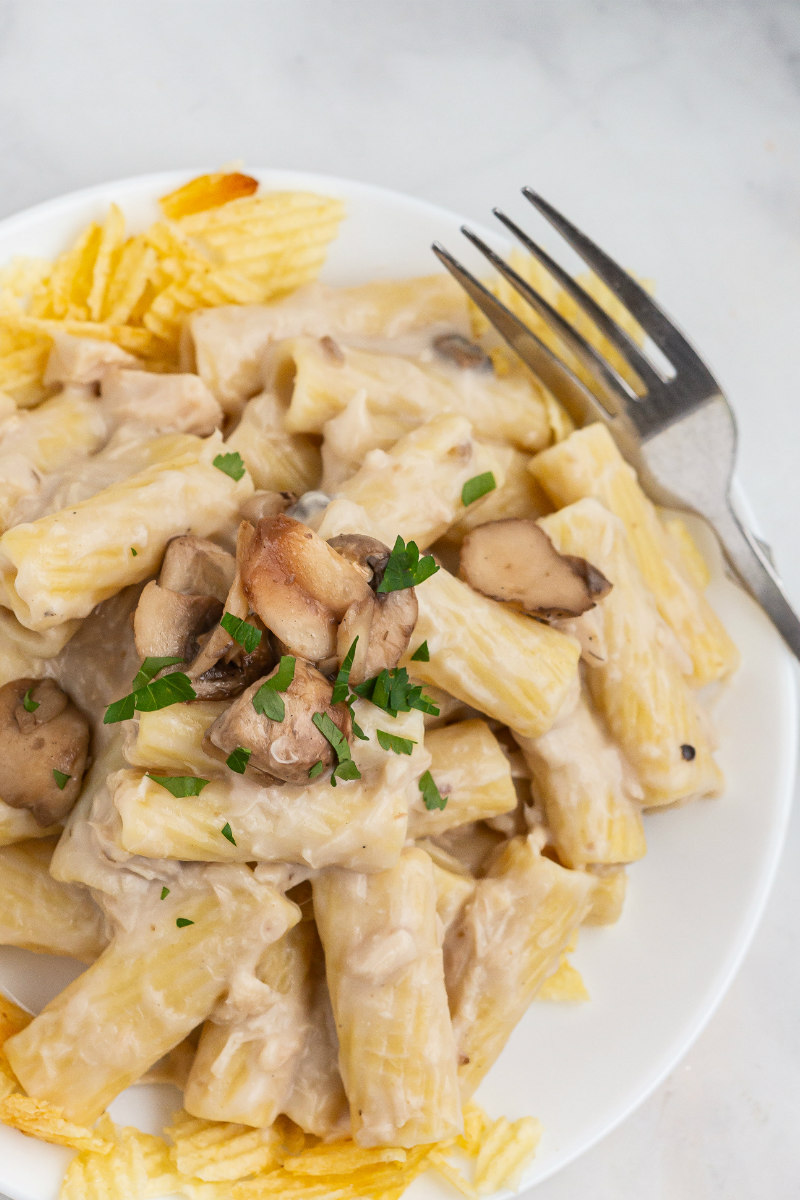 Kids may push away the mushrooms, so RecipeBoy’s idea was to cook them separately and add them on top, if desired. 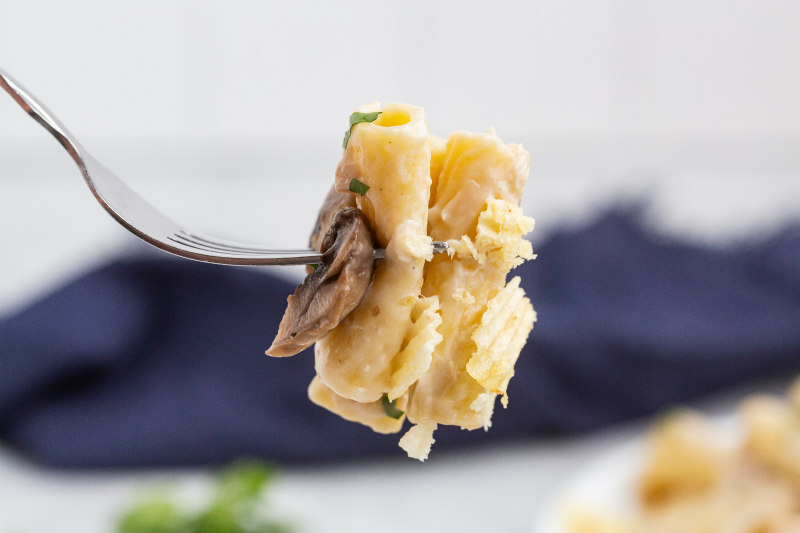 The potato chips add an element of crunch to this meal that is wonderful. That’s Grammy’s signature touch. Enjoy! 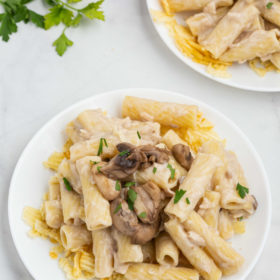 Yummy! I just love tuna casserole and this just became my new recipe.

This looks yummy! And so budget-friendly which is definitely a plus for a poor college student like me. Love what you're doing at your age..keep it up! :)

This looks really fantastic. I love meals that are quick and easy. I will definitely have to put this on my menu. Thanks for sharing!

I need to try this for my mother-in-law! She loves mushrooms! She always picks my mushrooms from my plate when she makes beef stroganoff. She actually taught me when I was first married to use Ruffles Sour Cream & Cheddar chips on tuna casserole. You should try it - it's great!

Since I'm a granny too, I better try your recipe. It sounds good and Uncle rich loves tuna.